ALTHOUGH freelance pianist Simon-Marc de Freitas was born on the tropical island of Trinidad, he grew up in the northern Alberta community of Fort McMurray, where his devotion to the piano is rooted. 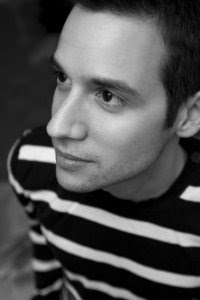 When Canadians from around the country were heading to the boom town in droves, Simon-Marc uprooted himself and headed out, pursuing a bachelor of music degree in piano performance at Vancouver's University of British Columbia.

From there Simon-Marc took his undergraduate degree out east, to study collaborative piano in Toronto. With six years of post secondary education under his belt, Simon-Marc returned to Alberta in '09, settling down in Edmonton, where he currently works as a piano instructor at the Grant MacEwan Conservatory of Music-Alberta College.

Simon-Marc is comparatively a rookie at living in our city (Spruce Grove, to be exact), but he "feels excited and committed to making a footprint in the arts & culture scene of Edmonton." In addition to his instructor duties, Simon-Marc is a freelance pianist who busies himself performing at various city events. In fact, he most recently showed off his fine-tuned skills at Edmonton's New Year's celebrations, "First Night," resurrecting the sounds of Frèdèric Chopin.

I Heart would like to thank Simon-Marc for taking the time to answer some questions for us, about the city he's still new to, which lends us a new perspective in our brief Q&A. For more information on one of Edmonton's newest art enthusiasts, upcoming performances, or contact info., check out Simon-Marc's website, where you can also listen to some of his expertise. Now, on to the Q&A...

1. What is one thing about Edmonton that you think stands out from other Canadian cities? There are many things that stand out, in particular the River Valley. It has an area of parkland per capita that surpasses all other Canadian cities. It is always a pleasurable experience walking and running through the trails.

We can also be proud of our arts & culture scene. The new Art Gallery of Alberta will open January 31st. Concerts at the Winspear Centre, just a few steps from the Art Gallery are plentiful and a phenomenal experience! I am an avid fan of the Alberta Ballet Company, the third largest company in Canada. I first saw the Alberta Ballet perform in Toronto and I was so proud to be an Albertan!

2. Do you have a favourite place to visit in Edmonton? I love the River Valley and often you can find me walking or running on the trails by Hawrelak and Emily Murphy Park.

3. If there was one thing you could do to improve the "City of Champions," what would it be? I am a person who likes to spend a lot of time outside, in parks and on trails. We are lucky in Edmonton to have a variety of parks to visit and many trails to take advantage of. However, if I were to improve on them, I would love to see more monuments of public figures, or pieces of art. I would like to encourage more outdoor concerts/ performances in the summer.

Way back in 2002 I was in Warsaw and almost every weekend there would be live performances of classical music in Lazienki Park, as well as outdoor art exhibits. One evening I remembered watching ballet under the stars. Similarly in Vienna, in 2006 I would often visit a park called Burggarten, where I would lay a blanket down and read or write.

I'd see babies making their first steps, jugglers practicing their moves, young people experiencing first love, and grandparents sitting for a picnic. These are unforgettable spectacles and I believe that the people of Edmonton would certainly be receptive to them. I'd love for us to take a keen interest in making public spaces like parks more enticing places to visit.

4. Whyte Ave. or Jasper Ave.? Whyte Ave. appeals more to me, just because of its proximity to the university.

5. What radio station do you listen to the most? CKUA.

6. If you had to sum up the city of Edmonton in three words or less, what would they be? Diverse. Generous. Lively.