EDMONTON'S premier winter festival is in full swing, even though the weather hasn't been fully co-operating with organizers of the 11-day (Jan. 14-24) Ice on Whyte Festival. You see, this is an ice carving gathering, which means the whole shebang is vulnerable to the temperature. So far though, there hasn't been any sculpture casualties (*knock on wood*--had any been around!). 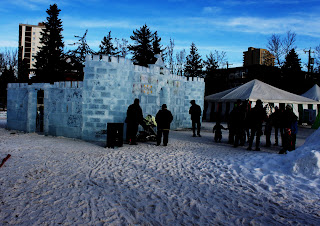 It would be a shame if there was though, because these frozen pieces of "hand"-carved art, illustriously shaped by chainsaw-wielding craftmen/women from around the world, are stunning to see in person, to say the least.

It was hoodie weather when I headed down to the Old Strathcona area to check out the 7th annual Ice on Whyte, situated on a fenced-in block at 85th Avenue & 104th Street. It set me back just a toonie to get through the entrance and into the arena, of sorts.

The lane of ice sculptures had applicable ribbons at their side, judging the best of these carvings of dolphins, giraffes, and mystical creatures. They were intricate chunks of outdoor artwork, chiselled by experts from Russia, Sweden, New Zealand, Tanzania, and Western Canada. At the left end of the walk was the first-place winner of the ice carving contest, "Meet Her Life" by a team from the Republic of Sakha, Russia (Fyodor Markov & Vladimir Ignatjev) (pictured below left). 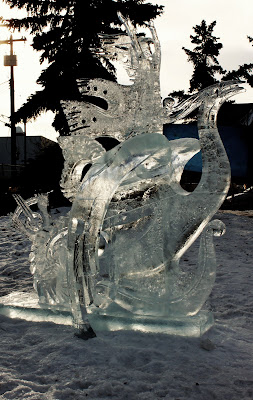 There's also a giant ice slide, an ice maze, an ice castle & play area, and even a small bridge made entirely of...you guessed it, ice! If you need to take a break from the "cold," there's the stopgap Van Houtte Cafe, which not only serves hot drinks (in support of the Canadian Breast Cancer Foundation), but also shelters guests for live performances by Boogie Patrol, Kirby Criddle & Jeff Morris, Paul Sveen, the Edmonton Jazz Orchestra, and others.

For a complete schedule of performers, times and dates at the Van Houtte Cafe ("Calender of Events"), click here.

But other than what I've already mentioned, there wasn't really anything else to the experience. I was in and out in a matter of 20 minutes (in other words, I half-assed it), but for just $2, I wasn't exactly outraged. If you've got kids then it's worth at least a trip, and then maybe again in the evening for some live music and hot chocolate. They also offer drop-in educational ice carving workshops from January 18th to the 22nd, for only $3.

Presented by the Old Strathcona Business Association, Ice on Whyte runs until Sunday, January 24th, until 10PM. The event is on daily from 2PM-10PM Monday-Friday, and 10AM-10PM Saturday & Sunday. For more information call the OSBA at 780-437-4182, visit the event's official website or its Facebook page, or email info@iceonwhyte.ca. 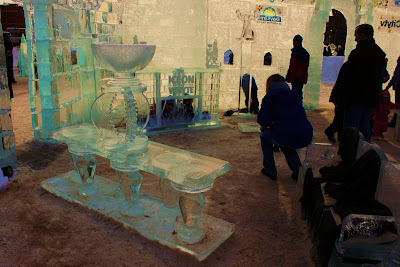