Come rain or high winds, as the old adage declares, the show must go on! 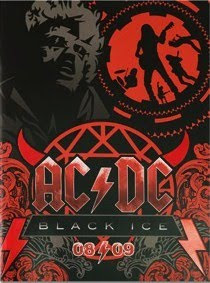 IMAGINE 60,000 men, women and children--most at variant stages of drunkeness--pounding their soaked fists into pouring skies and chanting "Oi! Oi! Oi!" Imagine a darkened football stadium full of adrenaline-hyped rock fanatics begging for Angus Young, a 54-year-old Scot, to strip off his trademark schoolboy uniform to bare his AC/DC undies (see video below)! Now try and imagine lightning bolts criss-crossing the evening sky as Brian Johnson screams "I'm a rolling thunder, a pouring rain...my lightning flashes across the sky"! I have no need to imagine such things, for I lived it last night!

The Wednesday, August 26, 2009 AC/DC concert at Edmonton's Commonwealth Stadium was a concert for the ages, and this city's most memorable in years, perhaps decades! It was a rare opportunity for a town in love with the rockers from 'Down Under' to converge under a summer night sky and yell along with lyrics we've all come to know by heart. It was the closest I've ever come to a musical euphoria, and won't soon be forgotten by any of the residents of what was, for the most part, a city within a city.

Tickets for the event first went on sale back in April, and I was lucky enough to have a determined sister stand in line for what must've been hours to snatch our own piece of what could be considered Edmonton pop culture history! After endless minutes, a few tears and nearly $500, my sister got her shaky hands on four passes into the big show. Needless to say--but I'll say it anyways--my brothers and I were emphatically jolted by the news, taken aback by a concert more than four months in front of us. Now, it was just time in between me and AC/DC in person. 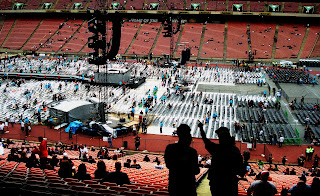 Let's skip ahead, shall we, to the morning of the big day (yesterday). My alarm clock ungraciously startled me outta my intermittent sleep at 6:30 in the morning. Most mornings this would piss me off and send me into an internal rant over how much it sucks to get up this damn early in order to go to a job I don't wanna be at. But this particular Wednesday morning was different, as the irksome buzzing of that alarm clock beckoned nothing but a prompt smile. It was AC/DC Day!

I mirrored my morning routine, scurried through traffic to work and made it through the 4-hour half-day I planned out months in advance, before making my way back home to catch up on a few errands and shut-eye. The booze and the pot could only enhance the pre-show celebrations, as AC/DC classics filled out my speakers in the time it took me to get myself ready. The four of us--myself and my three siblings--left early, parked the vehicle in a pre-arranged stall and walked the 6 or 7 blocks to the stadium. We arrived shortly after the doors opened, at 6:00PM, and stood in the fastest-moving line-up I've ever been in. Good start!

"It was the closest I've ever come to a musical euphoria, and won't soon be forgotten by any of the residents of what was, for the most part, a city within a city."

The doors had just opened but the concrete halls of the stadium were already cluttered with AC/DC aficionados, conversing amongst their friends, sipping on bad draft, and standing in countless line-ups for everything from pizza and soda to posters and keychains. But T-shirts were the hot commodity, and thus, was the prize at the end of the mother of all line-ups at the surging venue. I settled for a $20 program and a $10 poster that never made it through the rain.
e 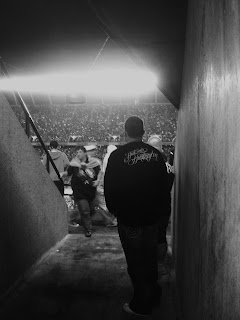 The opening band was a Northern Irish blues-rock outfit from Newcastle called The Answer, commonly referred to as the "new Led Zeppelin." Once hailed the "Best New Band 2005" by Classic Rock magazine, the 9-year-old, 4-piece group played songs nobody seemed to know, as the towering crowd were either taking leaks, buying in fleets, or taking to their seats. The Answer hit the stage at around 7:45PM, just before the 431 Air Demonstration Squadron planes and a pair of CH-146 Griffon helicopters flew over the awaiting fans. By the time the warm-up band left the puddle-patched stage there was an invigorate breeze that shifted the sporadic drizzle, leaving no one mourning the blazing sun.

Closer to 9:00PM everyone had gotten to their seats. The giant spotlights that shone at the tips of the stadium went out. The transfixed crowd, 60,000 strong, rose to their feet and cheered for the entrance of what we all came here for. AC/DC took to the stage and we roared like madmen taunting their enemies. But there were no enemies here, just thousands upon thousands of friends for the time being, united by a mutual appreciation and adoration for a feel-good rock band vacant of our city streets for nearly a decade. It was a welcome-back unlike any other.

Johnson, Williams, Rudd and the Young brothers ignited the stadium with one of their latest hits, "Rock 'n' Roll Train," before taking us back in time for a pair of rock standards, "Hell Ain't a Bad Place to Be" and "Back in Black." Thousands of plastic Devil's horns illuminated the Commonwealth as the band returned to their Black Ice album for "Big Jack." The Aussies were, in fact, touring the world in promotion of their current comeback record, indulging in a trio of other ditties from the 2008 set, in "War Machine," "Anything Goes" and the title track. But the bulk of us were here for the classics, and there were plenty of those to go around. 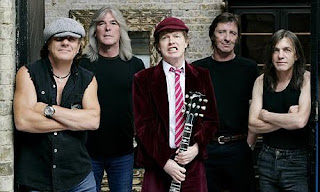 The thunder and lightning showed off in the midst of "Dirty Deeds Done Dirt Cheap" and "Shot Down in Flames," but it was never more apparent and admired as when the band broke into "Thunderstruck," one of their concert staples since 1990. The sprinkling of infrequent rain and the light show from above only electrified the crowd and the band alike, almost daring Mother Nature to bring it on! But she kept it subtle for the meantime.

Rowdy patrons were few and far between, as exceptions like a "gentleman" to my right, who fell two rows down into a trio of young boys, annoyed their engrossed guests. My four shots of alcohol ($6.50 each) and tokes of tightly-rolled joints (free!) lent me a buzz that glorified the raw experience, my first taste of live AC/DC. The band played on.

"It's good to be back," proclaimed Johnson to the spellbound audience. "We're here to do some rock 'n' roll tonight." Johnson made small speeches like that from time to time ("You guys are making us feel proud," he later admitted), but really took the fans to another level when he ran down the long and narrow catwalk only to leap and mount the rope that rang the massive "Hell's Bells," marking the halfway point of the exposè. Exhilerated headbangers were on cloud nine by this time, wearing out their vocal chords for well-earned cheers. I was gitty, near rock utopia, numbed, perhaps slightly by the rain, but mostly by the surreal mayhem that provoked a city within a city to remain in their seats even after Mother Nature made her own comeback. 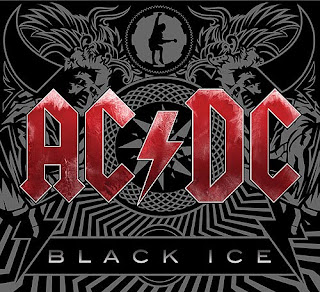 It was by the 13th song in, "Dog Eat Dog," that torrent showers put a slight damper on things, testing the dedication of 60,000 concert-goers, the high majority of which refused to budge. Some even tore off their T-shirts and laughed in the face of a foreseen downpour. That is, however, until the winds picked up, too. I scurried to the men's room only to find myself taking shelter as the boys played "You Shook Me All Night Long," another catalogue staple. But when the crowd began chanting the "Oi's" of "T.N.T.," I braved the elements in my soaked AC/DC T-shirt and "Oi'd" along with them, next to my two mesmerized brothers, both of whom have been enthusiasts of the group since elementary school. But man, it was cold!

Next, Johnson sang to us of a woman who "ain't exactly pretty, ain't exactly small," in "Whole Lotta Rosie," one of the night's nine songs that were originally recorded by the late Bon Scott, AC/DC's original lead singer. Another of those nine songs was the raucous "Let There Be Rock," which ended their 18-song set. But not before a sweaty, shirtless Angus risked pneumonia by delving into an extended guitar solo that must've been 10 minutes long.

Although the weather terrorized a comparible handful of satisfied fans (including myself), almost the entire troupe remained intact for the two-song encore, kicked off with "Highway to Hell," one of the last songs recorded by Scott before his untimely death in 1980. The band ended with "For Those About to Rock (We Salute You)," a rock 'n' roll anthem recorded just over a year after Scott died, and it remains one of the band's tour favourites. Thunderous canons lit up the sky at the finale of "For Those About to Rock," and then it was over. 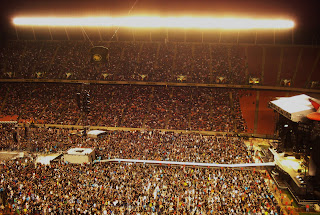 Organized chaos came next, as the thousands of locals and visitors spilled out the gates of the football stadium, home to the Edmonton Eskimos, and stopped traffic in the surrounding streets. The area was abuzz with activity and energy, as buses and limos filled up with tipsy, partially-deafened people baring either an AC/DC shirt or no shirt at all. Cop cars were in high volume, but were just precautionary, as partygoers tended to their vehicles parked as far away as Kingsway Garden Mall.

Drenched and worn out from a night that'll be with me for decades to come, I smiled at random moments that were made amongst those 2 and a half hours, as I walked to our own vehicle with my three siblings, high on more than just pot. This was, indeed, a concert for the ages, set to a rainy Wednesday night, but forever a part of a city who'll always "let there be rock," just as long as AC/DC align the marquee.

Below is a (poorly-shot) video I took, from high in the stands of the Commonwealth Stadium, of Angus Young stripping to his underwear for an adoring crowd of 60,000!