- August 20, 2009
e
Designed by Dub Architects in the early-'90s, Edmonton's one-of-a-kind City Hall consists of a 200-foot clock tower, a public pool-slash-fountain and, of course, a 43-metre high glass pyramid that rises from the 3-story building's roof. Opened in 1992, City Hall was originally supposed to pay tribute to the tipis of the First Nations, with five cones sitting atop the structure, but negative press had the design revised to pay homage to the Rocky Mountains instead, dubbed "Pyramid Power." The hall is located in downtown Edmonton, as the main feature of Sir Winston Churchill Square. 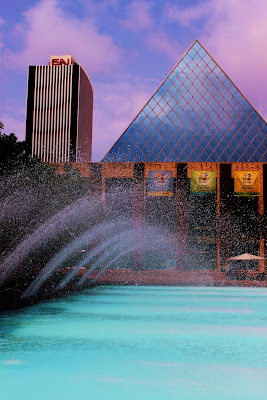