- August 13, 2009
Edmonton fans ignite a love affair with the late-blooming 'kings' of rock! 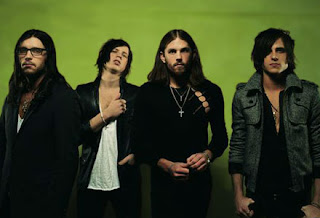 It hasn't even been a year since I heard Caleb Followill gloating that his "sex is on fire" on the local radio station for the first time. Admittedly, I wasn't bowled over right from the get-go, but by the second or third listen I was hooked. It wasn't long until I headed to the nearest mall to pick up Kings of Leon's Only by the Night CD (pictured below right), which easily persuaded me to check out their back catalogue as well, which included 2003's Youth and Young Manhood, 2004's Aha Shake Heartbreak and 2006's Because of the Times. I was now a full-fledged Kings enthusiast.

So, as you could imagine, I was humbled when I heard that the "biggest rock band in the world" were making their way to Edmonton's Rexall Place this summer. I got my hands on a pair of tickets just six days before the August 12th show, and was in a sedate musical euphoria for the days leading up to the Wednesday night concert, which took place yesterday evening.

My younger sister, some work friends, some strangers and I settled into Suite 114 of the hockey puck-shaped arena, where the Edmonton Oilers call home, and were warmed up with opening act The Whigs. The Athens, Georgia garage rock band earned comparisons to early KOL, but were only okay as we patiently waited for the headliners to take to the stage. As I sipped on my double rye & Coke ($13.50) the lights went down and the sold-out crowd roared for the rock royalty. 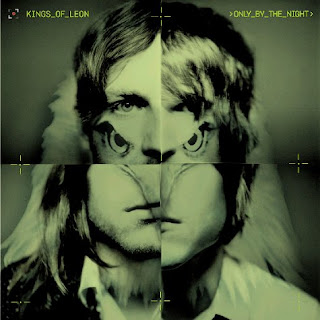 Due to alleged technical interruptions the show was slightly behind schedule, about 20 minutes or so (9:20 PM), but no one seemed to give a shit once the three brothers and their cousin launched into "Be Somebody," one of the last tracks on their latest album. They stepped back a few years and transitioned into one of the most popular ditties of the night, "Taper Jean Girl," which evoked the adoring audience into a frenzy. It wasn't long after that the whole crowd were on their feet, hollering at the top of their lungs, shoving their clenched fists into the air, and passing around joints to friends and strangers.

At moments in between the 22 songs they performed during the night, lead singer and rhythm guitarist Caleb briefly apologized for the technical issues, which I doubt anyone even noticed. I certainly didn't, as I was busy sipping on free beer and dancing with 13,000 other KOL fans, straining my poor vocal chords to sing along with songs like "Molly's Chambers," "Fans," "California Waiting" and the infectious "Crawl."

"All I have in my ears is you guys screaming, so I can't be mad, right?" asked Caleb about mid-show, giving up on worrying about the technical problems that failed to disturb anyone beyond the lit-up stage. Most fans stood and sang along to the lyrics of the Nashville band's radio hits, including "Use Somebody," "Notion" and the Grammy-winning "Sex on Fire," which aroused the most strenuous vocal applauds of the 2-hour party.

"No matter how bad we have it, every now and then we walk out onstage and we go like, "What the fuck man, this is crazy'," proclaimed Caleb somewhere during the evening, inducing criss-crossed applause. "And tonight is that night, and you guys are amazing. [Insert applause]. And I know we have concerts coming in Vancouver and all that shit, but I wanna stay here in Edmonton man! [More applause]. I think from now on when Kings of Leon play in Canada everyone has to come to Edmonton, right? [You guessed it, more applause]. So God bless every one of you guys and thanks also so very much for getting us through a tough night." [Applause seeps into sing-along].

I refused to break for the bathroom as the Kings ended their setlist, nor did I budge when they returned to the stage for a 4-song encore that included "Knocked Up," "Manhattan" and the primal "Black Thumbnail," the latter of which preluded the final goodbyes. Caleb had left the stage on one other occasion, as youngest brother Jared claimed, "He's going to throw up. He'll be back shortly." It is a routine "habit" of Caleb's that he still can't seem to shake.

In a year's time that allowed me to experience Bob Dylan, Neil Young, Kid Rock, Brad Paisley, Dierks Bentley and even metal heads Cradle of Filth live in concert, none were nearly as electrifying and soothing at the same time as were these former garage rockers, and I was genuinely disheartened when the lights came on to show us to the exits. We cleaned up our empties, snatched our concert T-shirts ($40-45), and poured out into the streets with the rest of the enthralled Edmontonians.

The night was over but the music will keep playing, and Kings of Leon will surely return to our obliging city for another shot of rock 'n' roll rapture. The beer spilt on me, the dress pants I was "forced" to wear, the "no cameras" rule, and even my sister taking a tumble all faded to the background as my favourite "new" band brought all those hours of listening to the CDs and watching the music videos to life, before my hypnotized (and blood-shot) eyes. Long live the Kings!

For a complete setlist for the August 12, 2009 concert click here.

Below is a video I took of Caleb showing the crowd some love...pay no attention to the unfortunate camera work!