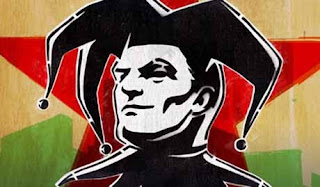 Well, it's official! The Edmonton International Fringe Theatre Festival is still the biggest and most preferred Fringe fest in all of North America, much ado to some massive support for the 11-day event that saw more sold-out shows than ever before. From August 13th to the 23rd, tens of thousands of Fringers walked through the makeshift gates of the Fringe grounds in Old Strathcona, and bought more than 92,100 tickets, with outdoor attendance at an estimated 550,000!

"On behalf of the hundreds of artists, the EIFF would like to thank our many sponsors, dedicated volunteers and patrons." This message welcomed guests to the Fringe's official website, which beamed of the exciting news that our summer staple outdid Winnipeg's record-breaking Fringe this past July (15-26), which held the record for a mere four weeks with its impressive 81,353 ticket tally (and their tickets were considerably cheaper!). E-town's "Stage a Revolution"-themed Fringe notched 12,000 more sold tickets than its 2000 record of 80,000, and 14,000 more than last year's Fringe, at nearly 78,000 (a 16% improvement).

The 28th annual EIFF is also North America's oldest Fringe, and is second only to Edinburgh, Scotland's raucous show in worldwide popularity. In fact, it was Edinburgh's edition that directly inspired Edmonton's own version, embedded into the city's summer season back in 1982. These days it ranks as one of Edmonton's favourite festivals, and as numbers don't lie, is bigger and better than ever!

"[The EIFF was] a blow-out extravaganza that clearly sets it aside as North America's foremost Fringe fest."

The 2009 rendition was my personal introduction to the EIFF, and it wasn't long before I was hooked on the theatrical extravaganza. I bought my trusty Fringe '09 program for $6 at my local 7-11, scribbled down a few of the more than 140 shows I wanted to check out, and then set out for Whyte Ave. on Day 2 of the fest.

In the company of a pair of friends, I caught the first half of one of the dozen free outdoor performances, "Aerial Angels," which was a decent impromptu start to my Fringe experience. My first actual theatre show was later that night, at one of the 18 BYOV's (Bring Your Own Venue), an improv spectacle called "Scratch" (4/5 stars). I laughed throughout its 60 minutes and wanted more, and knew this wouldn't be my last visit to the Fringe.

A few days (Day 6) later I returned with those same friends for a play titled "For the Love of a Zombie" (3.5/5 stars) (pictured above), hosted by the TransAlta Arts Barns' Westbury Theatre. I must confess that the title sold me, but the multi-media show was, by no means, a let-down. During the thespian exhibition's second and final weekend I had plans to take in a third performance, Peter McGarry's "Lysistrata" ($12), but it was amongst the numerous sold-out shows.

So, I accounted for two of those more than 92,000 tickets sold, which makes me an official Fringer, and one who'll surely be back for 2010. With the weather at its best, more venues scattered throughout the city, and the best Fringe performers in the world, the 2009 EIFF was destined for not only a stellar season, but a blow-out extravaganza that clearly sets it aside as North America's foremost Fringe fest, with a limitless--I hope--future.

Below is a list of the '09 Fringe shows that the writers of the Edmonton Journal thought worthy of 5 stars, and the cities they originated from: