- August 19, 2009
Zombie satires aren't exactly a new concept, but a local theatre troupe bring some originality to the table 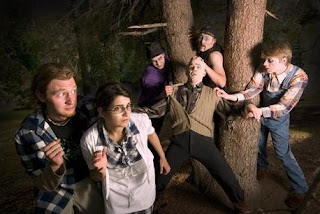 Let me be the first to tell you--if you don't already know--that the live theatre of Edmonton's International Fringe Theatre Festival is a lot different than multi-million dollar movies on the silver screen. I know, I know that goes without saying, but it never occurred to me just how different the two are until I made my Fringe debut last week.

I spent a lot of my hardly-earned money this year on watching blockbuster and indie movies in giant multi-plexes or small single-season theatres. And I've been to plays before at high-class auditoriums, as well as street performer shows and stand-up. But the Fringe is a whole 'nother world, full of bright-eyed artists and devoted patrons who come together to form a makeshift arts community in the heart of Edmonton, where you can take in some foul-mouthed improv and comedic adaptations on the same evening as a chain-saw juggler, late night cabaret, or a one-man musical tribute to the summer of '69.

From last night (11:30PM) to early this morning (12:30AM) me and a couple friends o'mine sat in the second row of the TransAlta Westbury Theatre (10330-84 ave.) to watch the cultural phenomenon known as the Fringe first-hand. We stood in line for about a half-hour before taking our seats on the rows of chairs directed at the stage that would host "For the Love of a Zombie" ($12), a multimedia play set on "an ambiguous farm somewhere in rural Alberta, the present day."

Previews of zombie movies played on a projection screen that hung at the back of the stage, which waited in shadows as the crowd found their seats. A stand-alone door stood to the left of the floor, next to a simple table set. A small kitchen prep area laid dorment at the other end of the dark stage, next to an old-school wood oven. As the last of the nearly sold-out audience settled in their seats, the lights dimmed and the screen began playing a video.

For the first five minutes we watched indie footage that introduced the zombie love story, written by Michael Beamish and Brent Felzien at a coffee shop in Lethbridge, which proved out of the ordinary for any live show I had ever been a part of before. The film transitioned into the live stage portion soon after, allowing us to meet Bram (Murray Cullen), a big city vegetarian "hippie" who falls in love with Gretchen (Rebecca John), a spunky farm chick who lives with her grumpy Grandpa (William Banfield). 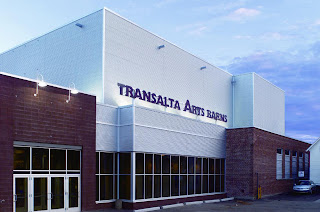 Gramps is obsessed with the weeds that sour the unprofitable land of their small farm, but he's just as unapologetic of his rude behaviour towards his daughter's boyfriend, who wants to make the farm lucrative again. I won't go any further in revealing the eccentric plot, but know this...the play's program warns that it "contains some language, sexual references and zombie violence!"

The play continued in this fashion for the full hour, switching from live performance to mini movies on the screen that would lend us viewpoints of the goings-on of beyond the fake kitchen in front of us. The cast, which included a trio of zombies with personalities (Beamish as investment broker Larry, Clifford Kelly as womanizer Homunculus, and Tom Pearson as simple-minded farm boy Junior), kept the audience in giggles from start to finish, and kept me, at least, on a short leash, eager for more.