- August 07, 2009
Blink and you might miss one of Edmonton's most interesting spots to experience the 'finer things in life'

WINE has never been one of my vice's, nor has it really even been an occasional excursion of mine, but after discovering the 4-year-old Passa Tempo I might have to rethink my drink of choice. The name of the bar translates to "passing the time" in Latin, adopting such a moniker as it was originally intended as a waiting room of sorts, as customers lingered around until their tables were ready at the neighbouring Culina restaurant. 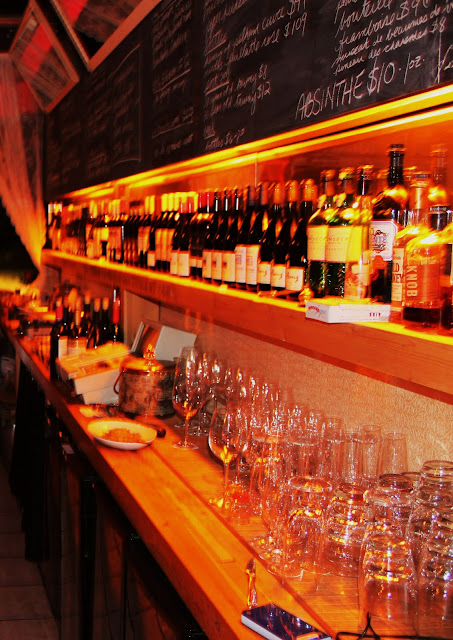 Hidden like a needle in a heystack somewhat kittycorner to Route 99, just off Whyte Ave., Passa is intimate in every sense of the word. Never quite smitten with the wine-tasting experience, I was hesitant to even peak inside the doors of the quaint watering hole, but I didn't really have to. The entrance was wide open, welcoming any and all passersby, as was the wall-size window that served as a presentation of a bar backed with a choice of about 30 ever-changing wines.

I manned up and headed inside anyways and made my way to the end of the room, which took all of three seconds. That's perhaps the most appealing part of Passa, as it couldn't be much wider than an LRT train or as long as a city bus. Mind you, it smells nothing like either of these examples.

There were five other patrons sitting cozily on the wooden benches that sat against the bar, and quite frankly, there wasn't much more room for anyone else other than them and myself, despite assurances that the room sits a dozen folks. The bartender asked what I'd like to drink and I asked her what was available other than fermented grape juice. She suggested a Scotch whisky, which I half-heartedly contemplated before I agreed to a shot of $10 Pyrat--an "enlightened ultra-premium dark rum"--on the rocks instead. As I sipped away I eyed the candlelit room.


"We're the only winebar that plays Mos Def"

Eccentric artwork barely filled out the limited wall space, as a group of mirrors headlined the main wall that also supported the panoramic chalk board showcasing the scribbled wine list. Lace curtains kept windows company, wine and cocktail glasses laid dorment across from my seat, and dim lighting fixtures set the ambience of this E-town secret, topped off with flower beds and a neon "open" sign to introduce the space.

A what-looked-like-a-couple munched away on a plate of cheese and crackers, as two other companions on the other end of the wooden bar chatted away over their selection of red wine. The gentleman next to me seemed a regular guest at Passa, talking with the bartender-slash-waitress as if they'd been acquaintances for years prior. A laptop sat immediately in front of me, humbly playing some song by Modest Mouse, and it seemed fair to say that this was on par with the rest of the music on rotation during my visit.

I glanced at the hasty menu that offered an array of snack-friendly dishes that I can't say I've ever sampled before, such as bacon-wrapped dates ($8), truffled popcorn ($6), olive tapenade ($9) and flourless chocolate truffle cake ($8). Unfortunately, I passed on dining out and settled in with my tasty rum instead. 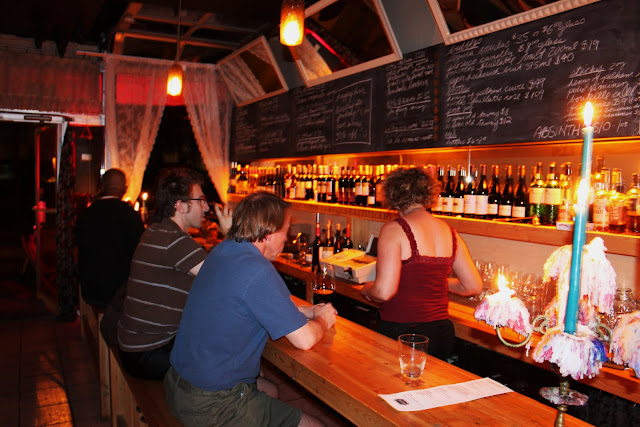 Standing out as Edmonton's "only winebar that plays Mos Def," Tempo boasts a mellow atmosphere I could easily get used to, as long as they continue serving a select stock of hard liquor to supplement all that damn vino, because a wine aficionado I am not! If you're thinking this might be the place for you, make sure you're in the mood for some innocent chit-chat with your fellow clientele or the friendly barkeep, as there's no corners to tuck yourself away in, no pool tables or arcade machines to pass away the time, and no VLT's to feed your loonies to. During warm weather though, a lone umbrella'd (not a word, I know) table welcomes you to enjoy the compact patio, if you're insistant on your privacy.

For me personally, the most appealing characteristic of Passa is that it almost seems as if it doesn't want to be found, content with its cast of regulars who probably stumble in from the local houses that line the streets heading up to the humble hideaway. No apparent desire to spread the word, no clear need to attract crowds from its neighbouring Whyte Ave., and no blaring music or flashing lights to catch our attention.

I'd be lying if I told you that I recognize a fine wine when I see one, but I'm sure that Passa Tempo allows for a diverse range of tasters to explore their revolving bottles of red's and white's, and I could only assume that the bar distances itself from the upper regions of the monetary pyramid when it comes to the accustomed drink. With my fixed income that's more than fine with me.