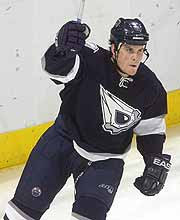 Edmonton has had a long and inspiring history with professional hockey, with the Oilers dynasty capturing five Stanley Cup championships within less than a decade, and being a one-time home to legends like Mark Messier, Paul Coffey and, of course, Wayne Gretzky (who held his wedding in E-town). But one of the few (former) Oilers to be able to call Edmonton their actual hometown as well is Mike Comrie, 28, who played 192 games in the copper & blue jersey.

Michael William Comrie was born and raised in the City of Champions on September 11, 1980, a year after the Oilers became an official team of the National Hockey League. He was born into money, as his father Bill Comrie and uncles Fred & John Comrie had established The Brick furniture company back in 1971, headquartered in Edmonton. The chain business is now worth millions, with more than 200 stores across Canada, and also led to Mike's nickname "The Brick."

As a teen Comrie attended Jasper Place High School and excelled in minor hockey as part of the St. Albert Saints (1997-98), where he led the Alberta Junior Hockey League in goals, assists and points. He was selected as the AJHL MVP and the Canadian Junior A Player of the Year, but left the province in 1998 to study at the University of Michigan. Comrie spent two seasons playing with the Wolverines, during which time he served as a First Team All-Star in the CCHA, and was recognized as a finalist for the NCAA's Hobey Baker Award as 'outstanding player.'

The 5'9" hockey sensation was drafted in the third round of the 1999 NHL Entry Draft, 91st overall, by the Edmonton Oilers, a team that his older brother Paul played 15 games with during the 1999-2000 season. Mike officially joined the NHL on December 30, 2000, tallying up 22 points in his first season (2000-01). Comrie spent two more seasons as an Oiler under a $10 million, 3-year contract, collecting 111 points (53 goals, 58 assists) before he was traded to the Philadelphia Flyers. 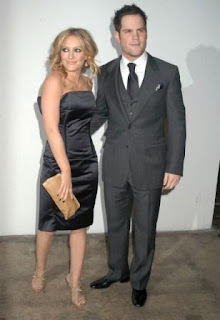 As a Flyer Comrie participated in just 21 games (9 points), and then scored another 95 points over three seasons with the Phoenix Coyotes, where he was coached by Gretzky himself. Comrie, who has played for Team Canada three times, skated in Sweden (Farjestads BK Karlstad) during the 2004-05 NHL strike. In 2006-07 Comrie was traded to the Ottawa Senators (25 points) and then moved over to join the New York Islanders for the 2007-08 season (49 points) as an unrestricted free agent. Halfway through the last season (2008-09) Comrie was traded back to Ottawa (7 points), on February 20, 2009.

In his personal life Comrie was once romatically linked to reality TV star Kristin Cavallari (Laguna Beach), before he began dating TV, movie and pop superstar Hilary Duff (Lizzie McGuire) in 2007. Duff, who has visited Edmonton with Comrie, has been known to attend many of his games, and recieved a Mercedes-Benz from Comrie for her 20th birthday (2007). Comrie is also involved in several charities and participates in various charitable events.