- August 08, 2009
The wild takes center stage in rare look at the best of '08 photography exhibit 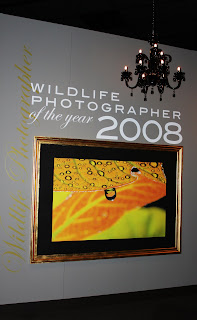 It happened to be a particularily dreary day out and the on-again, off-again rain put a damper on any chance of spending the afternoon snapping pictures of anything outdoors. While driving down 102nd ave. I remembered that the Royal Alberta Museum was exhibiting the Veolia Environment-sponsored Wildlife Photographer of the Year, which I had been wanting to take in since posting a brief article about it near the beginning of July.

I grabbed my camera and headed into the 42-year-old Edmonton landmark, paid the $10 entrance fee, and then walked over towards the exhibit. Not surprisingly flash photography was not allowed, so I grudgingly tucked my camera into its tote bag and began taking in some of the most fascinating wildlife photos I've ever seen.

When photography is one of your passions in life you're able to appreciate a stunning shot when you see one, just as I imagine a hockey fan does with an amazing goal on net, or a musician when he hears a song he won't soon forget. Some of the more than 80 award-winning photos in the 10-week exhibit nearly brought me to tears over sheer admiration for some of the utterly sublime snapshots of tigers, lions and bears.

But it wasn't all dominant mammals of the wild showcased at the exposè, which included images of Artic foxes, vine snakes, herring gulls, shiff-arms jellyfish, industrious worker ants and even the Malaysian forest reserves. The pics were separated into over a dozen categories, such as "Animal Behaviour," "The Underwater World" and "In Praise of Plants," and each piece offered extensive information on its backstory, as well as who captured it, what country the photog represented and the technical dialogue to allow admirers to learn the tricks of the trade.

One photo in particular was more disturbing than any other in the collection, but photographer David Maitland somehow captured an awkward grace as well with his "Sacrifice" shot. Maitland, who hails from the UK, quickly snapped the photo of a black colobus monkey thrown onto an open fire in the bushes of Libreville, Gabon, and it was the only one of the bunch that made me question the "all-ages" desription on the brochures.

But then there were other images that froze me in awe, inspiring an inner urge to retrace the photographer's footsteps and seize their works of art within my own lens. Amongst them were Maitland's "Deadlock" (UK), Carlos Virgili's "Sun Jelly" (Spain), Koos van der Lende's "Bottle in the Wind" (South Africa), Andy Biggs' "Skeleton Coast" (USA) and, of course, Stefano Unterthiner's "Troublemaker" (Italy) (pictured below). 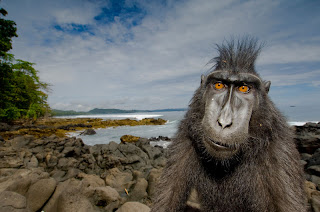 It took myself something like 45 minutes to view the entire anthology of pictures, each of which are enlarged and framed, set to the perfect lighting to compliment their ambience. There couldn't be more than 20 other folks in the large room at any given time, and only a few children, all the better to enjoy the show without disobedient distractions. One of those kids, a young girl, kept asking her father if they could go to another exhibit, but there wasn't much more than that when it came to diversions at the museum.

Based out of The Natural Museum of London (England), the 45th annual wildlife competition is an international affair run by the Natural History Museum and BBC Wildlife Magazine. It debuted at South Kensington to applauded delight by thousands of spectators, and Edmonton is the exhibit's first and only North American stop in a tour that will see it reach Australia, Brazil, Germany, Italy, Poland, Spain and the Netherlands.

Another advantage of taking in the show is that the $10 fee ($8 seniors/ $7 students/ $5 youth/ free under six) also includes entrance into the rest of the Royal Alberta Museum, which includes the Natural History Gallery, Wild Alberta, the Syncrude Gallery of Aboriginal Culture and the temporary Hummingbirds of the Americas exhibit (until October 31st). Whether you're a photog fan or not I'd recommend this wildlife presentation, which costs less than seeing a movie or eating a dinner for one, and may just leave you mesmerized as it did me. The show runs until Sunday, September 13th.
e
David Maitland Edmonton EDvent exhibit photography Royal Alberta Museum Wildlife Photographer of the Year