- July 09, 2010
The Internet claims another victim, as low sales leads to the closure of the Megatunes indie record chain

EVERY Thursday Vue Weekly publishes the twenty albums most popular with customers of the local Megatunes record shop. By the end of the summer season, this tradition will cease.

Our province's solitary indie record chain announced earlier this week that it's closing both of its stores, one located on Calgary's 17th Street S.W., and the other here on Whyte Ave.

According to Edmonton manager Dave Gawdunyk, the reasoning behind the closure doesn't fall back on the Whyte Avenue branch, which is apparently still "very viable," but rather due to slumping sales in the Calgary store.

But, "If you're an independent business," said Gawdunyk, "you need both stores to do well--and in Calgary, there's been a drop-off in sales. It's like one hand clapping, right? You need both to coexist."

Megatunes opened its doors back in 1988, when former record rep Mike Pleau--originally from London, Ontario--decided to quit his job and open up his own record shop in Calgary. Though the store sold music from mainstream acts in various formats, Megatunes specialized in local independent musicians, as well as little-known world music.

Despite grim predictions for the indie venture, Megatunes grew to become a Calgary institution. In fact, its prominence allowed for growth, and in 2003 Pleau opened a second store, right in the heart of Old Strathcona.

According to CKUA's Allison Brock, Megatunes "has been such an integral part of Calgary's music scene, no question. And it's made an impact across the country. Acts would break at Megatunes and then they'd break elsewhere. Macy Gray, Nirvana, The Pixies, Alejandro Escovedo. Mike listened to his gut on these things, and he didn't give a shit about what anybody else said."

In September 2008 Pleau suffered a fatal heart attack, leaving his widow Joni to take over the business. 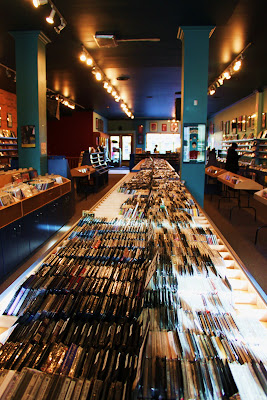 But, with the music industry in a downward spiral and the recent economic bust, it seemed inevitable that Megatunes would shut its doors.

In fact, other Whyte Avenue music shops have met a similar fate as of late. After 30 years in business, Southside Sound closed in May '09, while bankruptcy claimed both CDPlus and Sam the Record Man.

None of this comes as much of a surprise, as this generation of music listeners turn to online sources for their musical needs rather than the brick & mortar shops such as the struggling HMV or the competing Blackbyrd Myoozik, situated just down the street from Megatunes. (Not to mention the slow down of foot traffic on the popular strip).

Folks are downloading--both legally and illegally--their songs onto their iPhones, iPods or iPads, or burning discs rather than paying for tangible copies that offer cover art, liner notes, and the ability to burn a digital copy anyways. It's a shame.

The last CD I purchased at Megatunes was a copy of local rapper The Joe's Ut Oh. It was probably the only place offering a copy, other than online, in the city. In the world, really. "Nice choice," the clerk commented as I paid for the disc. It was!

Megatunes also retailed the big-name acts, classic albums, international artists, vinyl, DVDs, and other musical merchandise, as well as tickets for local concerts. It's even served as a venue (in its basement, in case you were wondering) for countless local musicians, and will do so again at this weekend's inaugural SOS Fest (July 9-11).

But its 7-year legacy as a local music advocate will soon come to an end, and who knows who'll be next to call it a day?

Megatunes is currently advertising its "Summer Sale" (July 1-August 31), which will see 25% off everything (excluding tickets and consignment). For an additional 25% off, click here.

"The outpouring of emotion has been very overwhelming for us--we have that rabid fan base, like CKUA listeners," Gawdunyk continued. "That's who we primarily cater to--and some people feel like they're losing their right arm."

Below is a video of Toronto's Elliott Brood performing with his band in the basement of Megatunes on Whyte Avenue, courtesy of Vue Weekly.