- July 14, 2010
Visionary independent musician festival shakes up Old Strathcona, exposing 150 of the most talented artists of our thriving music scene 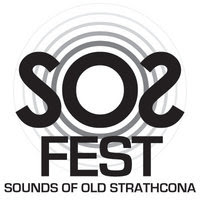 IN a town synonymous with a rich festival legacy, virgin events better have the chutzpah to garner any real recognition or relevance to stand out from the crowded surplus of summertime goings-on in Edmonton. By all accounts, the maiden SOS (Sounds of Old Strathcona) Music Festival did just that.

Without a hitch, no! But the 3-day Whyte Avenue extravaganza was a definite triumph for its organizers, the artists, the venues, and the thousands of local and not-so-local patrons who took in the 150+ shows from July 9-11.

Last Friday (July 9) was the kickoff of the first-ever SOS Fest, when acts like Captain Tractor, Ann Vriend, Ten Second Epic, Mustard Smile, and Politic Live blistered huddled barrooms and cramped lounges with the best indie music this province has to offer.

The following morning (July 10), I arrived on the infamous strip for my first shift as a volunteer for the musical showdown, heading up to the Old Strathcona Business Association (OSBA) to collect my itinerary, my free T-shirt, and the yellow wristband that'd allow me access into any of the dozens of hour-long(ish) concerts during the rest of the weekend.

My "venue manager" Norm and I headed across the street to the Accent European Lounge, where we sold tickets ($10) and blue/pink wristbands ($30/$15) for the restaurant's afternoon lineup, which included film school singer-songwriter Samara Von Rad, emotive Hungarian-Dutch musician Ido van der Laan, and one-half of the instrumental Mayer-Neeland Duo.

From there, and relieved of my duties, I was inclined to check out the going-outta-business sale over at the neighbouring Megatunes. Scouring the remnants of a once thriving music shop, I noticed blaring electric guitars and throbbing drums coming from the basement. Only then I remembered that Megatunes was one of the 22 area venues hosting the artists of SOS.

I ignored the sale and headed underground. A couple dozen folks sat on the carpeted floor of the basement, a couple more were slouched on a worn sofa at the back wall. The lead vocalist of Edmonton's burgeoning alt-punksters The Fails tip-toed in between the casual crowd, chanting into her mic as her sweaty bandmates scathed their abused instruments.

Shuffling through the gradually mounting audience, the agile singer insisted we all take to our feet, as to erode that cafe singer-songwriter vibe, surely active elsewhere on the Avenue. The shirtless drummer was stellar on his kit, rapidly pounding out a beat we mostly bobbed our heads to. Their lead guitarist would intermittently swap vocal patrol with the lady lead, as a pair of bassists(?) supplied a noxious back-up blitz of power strings.

I left before their finale, but was musically quenched with the ironically-named Fails, who had the pleasure of being one of the last acts to play the 7-year-old record shop, set to close at the end of the summer. 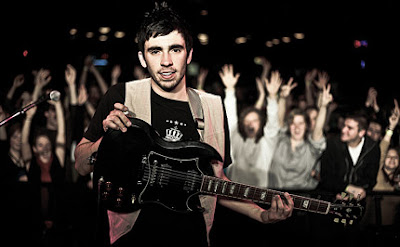 I returned to SOS later that evening for the Michael Bernard Fitzgerald (MBF for short) show at the Old Strathcona Performing Arts Centre (OSPAC for short), a late birthday gift to my sister Carrie.

We arrived about 30 minutes early, but with enough time to luckily meet Mr. Fitzgerald (pictured left) in the lobby area of OSPAC. I had met the Calgary musician at the Starlite Room back in February, but that was mostly an autograph session. This time 'round we conversed about his upcoming performance, his most recent multi-city tour, his next album (early 2011, hopefully!), and those sorts of things.

We caught the last few songs of MBF's onstage predecessor, Vancouver's Darren Frank, strumming his electric guitar to his melodic mid-tempo ballads of daily ordeals and cosmic wonderment. I was sold in this short span, divvying up the $10 for his first full-length album That Lived-In Look. (Listen to or purchase the 11-song set here).

By about 10PM Fitzgerald was sound-checking, the room stretching to standing room only, and my sis and I eagerly awaiting the 24-year-old singer-songwriter to try and top his Starlite spectacle.

But, to be honest, I had no real anticipation for that best case scenario, for that aforementioned downtown gig was fan-fucking-tastic! But this time around Fitzgerald was on his own, without that accompanying band and choir that made that February show so God-damn memorable! It was an intriguing instrumental inflection, as MBF opted for rotating electric and acoustic strings in place of a thunderous drumline, a lively horn section, and flattering choir that cemented his Starlite affair as one of the best I'd ever been to.

Yet, with only his guitar(s), jovial charm, and a bottle of Perrier, MBF somehow crowned even that Starlite show with tonight's relaxed-by-comparison effort.

Decked out in his red top and black tapered jeans, MBF serenaded us with textured ditties like "Maxine," "Amazed," "Care for You," "Caroline," "Movie Life," "Suzie (I Love You)," and a pair of brand new tracks as well, all acquainted with Fitzgerald's winsome banter. Somewhere in between he infused a signature sampling of Ke$ha's "Tik Tok," a tactic familiar to the humble gentleman.

Then, as is tradition, Fitzgerald wrapped up his set with the most eruptive melody in his idealistic repertoire, the infectious "Brand New Spaces," candidly commingled with snippets of Flo Rida's "Low," Sisqo's "The Thong Song," and Justin Bieber's "Baby" (see video below). As soon as the audience recognized the starter notes they jumped outta their seats and began clapping their hands to its rhythmic beat.

Something like two dozen folks ignored their inhibitions and began dancing in front of MBF, himself smiling ear to ear as he picked on his acoustic, tipped off with his trademark daisy. He quickly welcomed us all to the spacious stage, and at least half obliged, stomping and clapping like it was some private family function where everyone knew each other.

What a shame that more people don't know about this guy.

On Sunday morning (July 11), day three of SOS Fest, I lent my efforts in setting up vendors, picnic tables, and recycling bins in the bizarrely uninhabited Whyte Avenue, where cop cars blocked off the vehicular traffic from 103rd to 105th.

Myself and several other volunteers spent much of the late morning and early afternoon chatting and people watching, as we and organizers awaited the 105th Street stage to arrive. Its 103rd counterpart was already occupied by local rockabilly group The Swiftys by the time our second stage showed up, two hours after it was supposed to. 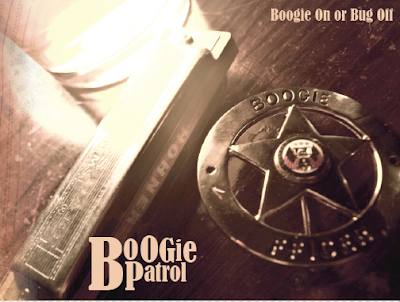 At no fault of SOS staff, the delayed arrival set in motion an immediate change in schedule, forcing 105th stage openers The Yardbird Suite Jazz Revue to cancel its appearance (12PM). However, the platform finally arrived shortly after 1PM, with enough time for folk trio The Twisted Pickers to play their programmed slot.

At this point the crowds tended to favour the 103rd efforts, where Jeff Stuart & the Hearts (who later tackled 105th as well) and The Dustin Bentall Outfit treated passersby. But by the time Edmonton blues band Boogie Patrol hit 105th, the outdoors crowd had swelled to near street capacity.

Singer Rotten Dan peeled away the raucous layers of his gruff vocals--born to lead a blues band, no doubt--and made a scorching sun bearable and this nearly ruined 105th Street production a surefire hit. But his comrades surely offered a fierce parallel to Dan's seasoned chops and screeching harmonica, resoundingly pleasing an audience that couldn't help but dance or at least tap their feet to their complimentary set.

At a small fold-away table to the side of the stage I sold copies of the band's CD Groove On or Bug Out ($20), which includes a cover of The Beatles' "Come Together." Dozens gladly surrendered their bills for a copy, including myself.

The remaining afternoon and evening were left to the likes of Forest City Lovers, The Fugitives, Yoav, The Whitsundays, and headliners Shout Out Out Out Out (featuring Cadence Weapon), who settled this 3-day festival with a bang. By about 9PM the premiere SOS Fest wrapped up its grip on Whyte Avenue, which in turn embraced this encouraging and why-the-fuck-hasn't-this-been-done-before concept.

Sorry, sometimes I get all riled up!

Cursing aside, the Sounds of Old Strathcona Music Festival has intrigued an underground community of musicians, a deprived colony of indie music enthusiasts, and an indulgent cluster of local landlords willing to set the stage for a sometimes mesmerizing, sometimes invigorating, sometimes blissful soundscape of our most beloved (and sometimes under-appreciated) music makers.

Can't wait for round two!

The music lovers of Edmonton, I Heart Edmonton, and myself would like to thank the artists, the venues, the volunteers, and of course, the organizers (Kaley Bird, Brandi Sidoryk, Brette Sidoryk, Amy Thiessen, Brent Oliver, Ellie Anderson, Megan Young, Shauna Llama, Shirley Lowe, etc.) of SOS Fest 2010. Thank you, and see you next year!

Below is a video clip of Michael Bernard Fitzgerald wrapping up his Saturday night (July 10) gig at the Old Strathcona Performing Arts Centre.