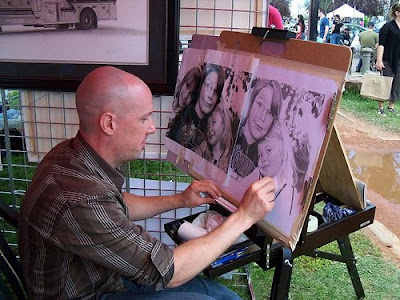 THE other weekend (July 9-11) we saw the exuberance of musical talent our city and neighbouring towns have harvested, all converged on Whyte Avenue in Old Strathcona for the very first SOS Fest. Last weekend (July 16-18) it was a visionary affair, but the talent was just as evident.

More than 230 canvas sculptors exhibited their paintings and sketches as part of the 15th annual Whyte Avenue Art Walk, a non-juried "outdoor studio and gallery" meant to expose our brightest visual talents, and extend to them the opportunity to raise their profiles and build client lists. Mission accomplished.

The event was born out of a communal desire to bring local art to the masses, to allow us not-so-talented beings to chit-chat and mingle with other art enthusiasts and supporters, as well as the actual artists themselves. And what better setting than the hospitable Old Strahcona region?

When it first started, back in 1995, just 35 artists were highlighted. Now, there are more than seven times that amount! The festival is administered and supported by The Paint Spot--an artist-owned art supplier and advocate--and has a close partnership with both the Old Strathcona Foundation and the Old Strathcona Business Association.

Here's the gist: Dozens and dozens of artists pay an affordable fee ($40-$100) for a little piece of sidewalk real estate, where they set up their makeshift galleries of abstract oil & acrylic paintings, brazen water colours, complex multi-media pieces, dead-on pencil & ink sketches, and their prints to sell to the tens of thousands of mostly Edmontonians scouring the blocks for something to hang proudly on their walls.

"Bringing the studio to the streets allows for a more intimate relationship between artist and viewer," said Kim Fjordbotten, owner of The Paint Spot. "Meeting artists from all over Alberta, talking to them about their work and finding something that speaks to you, this is the Whyte Avenue Art Walk."

Friday (July 16) was a bust, as rain ruined the kickoff of one of the biggest festivals of its kind in North America, which was reason enough to skip out and wait until later in the weekend, at the risk of missing out on perhaps the best pieces in each artist's portfolio.

Saturday (July 17) was earmarked for sleeping in and strolling the competing Edmonton International Street Performers Festival in Churchill Square, so Sunday it was.

We arrived on Whyte near 3PM, just hours away from when the fest shuts down for the season. The sun beamed down like a bitch, and the Avenue was brimming with spectators, some lugging around prints or originals tucked under their arms...kinda like the dude in the logo.

Diverse, prolific artists aligned every Whyte Avenue business, surrounded by their own sweat & tears (uh...their art), some even in the process of painting or sketching some empty canvas as folks sauntered by. Most of the thousands of pieces were marked with their price tags, some ridiculously overpriced (I saw one at $4000!), and others were more than fairly assessed. Many vendors had accompanying boxes of prints, much more affordable than their originals, of course.

With my budget, originals were out of the question, for the most part. Sorry artists, blame it on my boss.

The first print I purchased ($20) was a piece by Iranian painter Saeed Hojjati, capturing a night cityscape of Edmonton, mirrored by the evening glimmer of the North Saskatchewan. He titled it "ETown III" (pictured above right).

Hojjati, who is a member of the Society of Western Canadian Artists (SWCA), has some of his work displayed at Lilliana's Fine Art Gallery and Art Beat Gallery in St. Albert. He's also involved in Edmonton's annual Night of Artists event, which will coincide with A Taste of Edmonton this upcoming weekend. 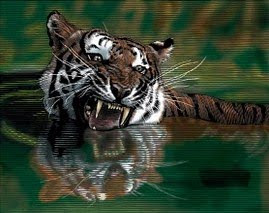 Right across the street from Hojjati's setup, close to the Accent European Lounge, was Darren Gilday's display of vibrant artwork of (although not limited to) African indigenous wildlife, as zebras, giraffes, lions, elephants, and hippos served as subjects for his visually-appeasing cluster. I couldn't help picking up a copy of the submerged tiger pictured left ($15).

Although he currently resides here in Edmonton, Gilday earned his bachelors degree in Visual Communications (with a major in Illustration) at the Alberta College of Art & Design in Calgary, where he honed his passion for "scratchboard work with digital colour." Gilday presently is involved in BioWare, an Edmonton-based video game developer.

I recognized some of the other 200+ painters in their fold-away chairs while on patrol, including Darlene Adams and Justina Smith, both of whom have been profiled on I Heart Edmonton. Others included Jared Robinson, Mandy Archibald, Chris Riley, Tim Koslo, Nonnie deBeer, Oksana Zhelisko, Kristina Steinbring, Mark Whaley, and Lindsy Murland. For a complete list of participating artists click here.

After a little more than an hour of wandering the ins & outs of Whyte Avenue, including McIntyre Park--where live entertainment occupied a corner gazebo--we headed back home, our protected prints in tow, not to mention the subtle satisfaction of scantily supporting this evolving venture and is varied creators.

Now, will someone recommend a good framing shop in Edmonton?!