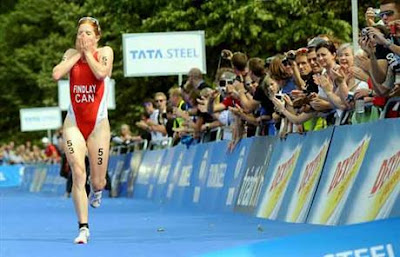 University of Alberta pre-med student Paula Findlay (pictured right) has made our city beam with pride, with her Saturday (July 24) first-place title at the 2010 World Championship Triathlon Series race in London, England. The Edmonton triathlete was the first to cross the finish line (at one hour, 52 minutes, 48 seconds) of the Elite Womens race at Hyde Park. "Oh my God, this is so unbelievable," said an elated Findlay, 21, who has won two other International Triathlon Union World Cup races this year already (Mexico and Quebec). "I felt better than ever on the run today, and just kept pushing as hard as I could." Silver went to Switzerland's Nicola Spirig, and England's Helen Jenkins took bronze.

Edmonton's most diverse festival is just around the corner, as organizers are about to launch the 35th annual, 3-day Heritage Festival, running Saturday, July 31 to Monday, August 2 (which happens to be Civic Holiday). The multicultural showcase will occupy Hawrelak Park (9330 Groat Road), where 62 pavilions will represent more than 80 cultures from around the globe, all descending in our culturally abundant populous. The traditionally thousands of visitors will be able to sample culinary delicacies, take in ethnic performances, learn about foreign society, and shop for handmade crafts, clothing, artwork, and more. Amongst the dozens of nations that will be represented at the free event include Japan, Iraq, Zimbabwe, Chile, Sri Lanka, Afghanistan, Thailand, Ethiopia, China, and Italy. Sorry, but there is no public parking available. For a map of the festival grounds click here. For more information you can call 780-488-3378.

"There is no greater honour than being elected to City Council and representing the citizens of the current Ward 2 and this great city," said Edmonton's longest serving councillor Ron Hayter, who announced his retirement after 33 years in city hall. "I believe my record demonstrates long-time commitment to my city and, as a cowboy might say, 'I can hang 'em up with pride'." The 73-year-old Ward 2 councillor was first elected to his seat in 1971 (to then Ward 3), and was a major campaigner in the development of our city's LRT system (est. 1978), which was the first of its kind in a North American metro of less than 1 million people. It opened just in time for the '78 Commonwealth Games, for which Hayter served as founding director. From 1995 to 2001 Hayter was part of the National Parole Board, only to return to city hall in '01. He will continue being involved in the city even after he has officially retired from politics. 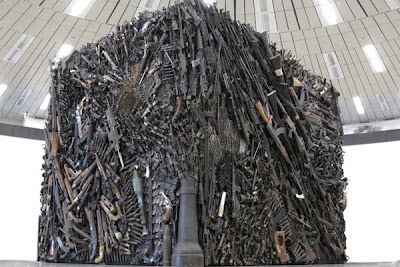 A remarkable 4.5-tonne sculpture by Edmonton artists Sandra Bromley and Wallis Kendal has been censored by the UN for an exhibition this summer in Vienna, at the request of the Chinese delegation. The Gun Sculpture (pictured left) is a giant cube of welded-together deactivated guns, ammunition and landmines, but the controversy stems from its coinciding exhibit element of 114 photographs of victims of violence, including two images of Tibetan nuns. "We were absolutely shocked," said Bromley, who's work is currently showing at the Art Gallery of Alberta (Sandra Bromley: FIRE). "This was done without any consultation or permission." The Gun Sculpture made its debut at the Edmonton Art Gallery in 2000, and has since travelled the world.

The 14th annual Rock'n August International Car Show & Music Festival will descend on St. Albert--in support of diabetes research & education--from Tuesday, August 3 to Saturday, August 7. Tens of thousands are expected to take in the more than 500 classic cars on display, street dance, BBQs, silent auction, and musical entertainment, which will kick off at the St. Albert Inn on the 3rd with a breakfast (7-9AM). Thursday, August 5 will be 'Drive-In Movie Night' (10PM-12AM), where $10 (per car) will get you in to view George Lucas' American Graffiti (1973). For more information about the 5-day event click here.

Edmonton's own Corb Lund has been nominated for the top award of the night at the 29th annual Canadian Country Music Association (CCMA) Awards, the Fans' Choice Award. The alt-country rocker will go up against Johnny Reid, George Canyon, Doc Walker, and Lacombe's Gord Bamford during the televised event, which will be held at Rexall Place on Sunday, September 12. The former Grant MacEwan student, and member of local punk band The Smalls, is currently promoting his sixth and latest album Losin' Lately Gambler (2009), released on the L.A.-based New West Records. No announcement yet on who will be performing at the upcoming CCMA show.

Vancouver may have hosted the 2010 Winter Olympics, but our humbled town will present the 2010 Fibre Olympics, an annual juried exhibit that will showcase the talented members of the provincial Hand Weavers and Spinners & Dyers of Alberta (HWSDA) organizations. Presented by Visual Arts Alberta, opening reception for the month-long show will take place Thursday, July 29 (7-9:30PM) at the VAAA Gallery (10215-112 St./ 780-421-1731), and the event will continue there until Saturday, August 28 (Mon-Fri, 10AM-4PM/ Sat, 12-4PM), displaying the best workmanship in blankets, coats, scarves, tea towels, and framed pieces. Admission is free into the Gallery, which is closed on Sundays and during the Civic holiday weekend (July 31-August 2). 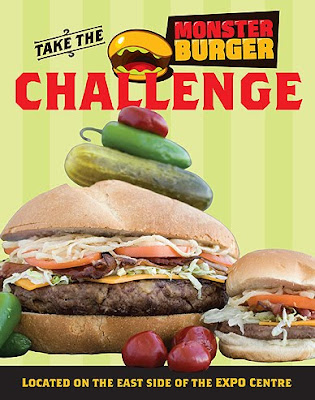 Reba McEntire, one of the most prolific and accomplished acts in country music, will return to Edmonton's Rexall Place on Friday, October 29. Tickets ($49.50-$89.50) went on sale today (July 24) and are available at Ticketmaster. McEntire, 55, has sold more than 56 million records worldwide, acquired 34 #1 hits, published two best-selling books, starred on Broadway and in her own hit TV sitcom (Reba), and has won more than 80 major awards, including a pair of Grammies! And after 33 years of recording and touring the world, Reba continues to stay relevant, as her last two albums (Reba: Duets and Keep on Loving You) both topped the Billboard all-genre Top 200 charts. Opening for McEntire will be Melissa Peterman, who played Barbara Jean on the Reba show. Peterman recently signed to Big Machine Records to put out a comedy album later this year.

Indie movie lovers, listen up! The 2010 Edmonton International Film Festival recently announced its 'Opening Night Film,' the Michael McGowan-directed Score: A Hockey Musical. "I'll be the first to admit that I am not a fan of musicals," claimed EIFF producer Kerrie Long. "But when a team of burly hockey players break out into song it is laugh out loud hysterical!" Filmed in Toronto, Score will feature some big names, in Olivia Newton-John, Stephen McHattie, George Stroumboulopoulos, Nelly Furtado, Hawksley Workman, Allie MacDonald, and the voice of Franklin, Noah Reid. "This film moved me in so many ways, and by the end I put on my toque, grabbed a Tim Horton's, and shouted 'I am so proud to be Canadian," continued Long (although I think she's lying!). "It's the perfect film to kick off the 2010 EIFF!" The 24th annual EIFF runs September 24 to October 2, at the Empire City Centre 9 in downtown Edmonton. Check out the trailer for Score below.

Clean Up Your Act is presenting the 'Summer of Punk Pride Fest' on Wednesday, August 4 (7-11PM), at the Alberta Ave Hall Meeting Space (9210-118 Ave.). You can support local and touring hardcore punk for just $10, which will get you into the all-ages showcase that'll feature Messiahlator, Stillbirth, Young Oppression, Death from Above 1970-Crust, Substance, Still Fighting, Constraints, and Detriot. For more information on the show you can check out the event's Facebook page.

And last, but not least (okay, maybe least!), Capital Ex is in full swing, which means brave visitors are welcome to shell out $39.50 to tackle the 'Monster Burger Challenge'! But, if you actually manage to finish the 1kg of beef--topped with half a pound of bacon, spiced cheddar cheese, fried onions, lettuce, tomatoes, and a chipotle mayo, on pagnotta bread--then it's free of charge, and you'll even get your very own souvenir T-shirt! Which you can use to clean up your own vomit afterwards! For every burger sold, 1kg of beef will be donated to the Edmonton Food Bank. You can try the Monster Burger (pictured above right) for yourself on the east side of the EXPO Centre.

The video below is the official trailer for 'Score: A Hockey Musical', which will be the 'Opening Night Movie' during the 2010 Edmonton International Film Festival (Sept. 24).