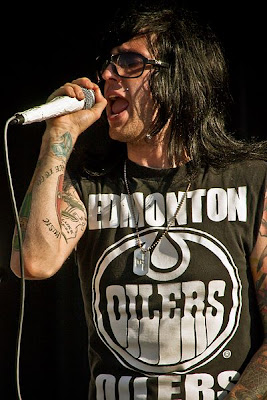 THEY may not pen the most engrossing lyrics, nor foray into unconventional sounds, but Stereos (not the Stereos!) are nonetheless from Edmonton, and that's why their bubbly pop ballad "Butterflies" is July's Music Clip of the Month.

Lead vocalist Patrick Kordyback (pictured right), lead guitarist Miles Holmwood, drummer Aaron Verdonk, bassist Daniel Johnson, and rhythm guitarist Robert Chalifoux each hail from our hometown (technically, Miles is from Sherwood Park), and are one of our city's most popular bands out there right now, raising the profile of music cognizance in Edmonton.

They formed two years ago (as Stand By Me, and later Turn It Up) and have virtually hit national stardom overnight, much ado to their appearance on MuchMusic's original series disBAND. Some 20 bands battled it out on the Canadian talent series, until fans and judges (including Kiss' Gene Simmons) whittled the competitors down to victors Stereos.

Their pop sound, with an occasional hip-hop aspect, gave Stereos the edge to tackle first place in the coast-to-coast challenge, which landed them an instant record deal with Universal Music Canada last year.

In October '09 Stereos released their self-titled, Juno-nominated debut album, which premiered at #3 on the national charts, and has since earned gold certification in Canada. Their first single, "Summer Girl" was a summer staple on Canuck radio, clinching a #2 spot on the nationwide pop charts. They continued with hits in "Turn It Up" (#30), "Throw Your Hands Up" (featuring Jhevon Paris) (#3), "Get With You" (featuring Far East Movement) (#31), and now "Butterflies."

Since hitting it big the boys have returned home for an opening gig with Hedley, as well as a memorable show at the Starlite Room. They have no immediate performance booked for Edmonton, though hardcore fans can road trip it to Calgary next week for the Stampede, where Stereos will play on Monday, July 12.