- July 22, 2010
Let's face it, we love to eat! That's why Edmonton's best food fest is expected to do just fine in the midst of Capital Ex and the Indy 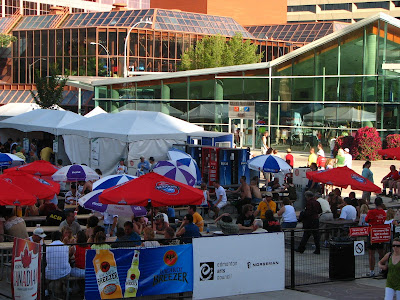 THIS is officially Edmonton's busiest weekend, as a trio of major events are vying for your attention...and cash! Thousands will choose Capital Ex at the Northlands grounds, and thousands of others will opt for the Indy at the City Centre Airport, in the Kingsway area. But for something a little less...quiet....you can try A Taste of Edmonton, at Sir Winston Churchill Square.

From Friday, July 23 (11AM) to Sunday, August 1 (11PM) the 26th annual food fair will descend on Churchill Square in downtown Edmonton, where more than 40 vicinal eateries will offer up samples of their best dishes and desserts.

There'll be 17 choices brand new to the 10-day festival, including an Orange Tangerine Sherbet Sandwich from the Blue Willow Restaurant, Calabrese Potatoes with Chipotle Aioli from Zucchero Cappuccino Bar, Korean Seafood Pancakes from the Korean Village, and Chocolate Lava Cake from the Hong Kong Bakery. For a complete list of participating restaurants click here.

To wash it all down with, you've the choice of various wine and beer lists, from regional wineries and breweries, the latter of which includes Sleeman, Yukon Brewing Co., and the Edmonton-based Alley Kat Brewing.

The video below was filmed at last year's A Taste of Edmonton, and is courtesy of Market Xpander (YouTube).