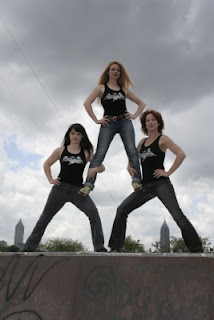 It's day three of the world-renowned, 28th annual, "Stage a Revolution"-themed Edmonton International Fringe Festival and so far all I've taken in is one and a half shows! Ever! That's right, in my 29 years--and the Fringe's 28--I had never caught a show of the groundbreaking festival prior to last night (Friday, August 14), which I'm a lil' embarrassed to admit, but then again I've never been to the Folk Fest, Heritage Days or the Indy either, soooo....

Anyways, back to last night. After work, a nap, a shower and a drink (or two) I headed to Whyte Ave. to meet up with a couple friends o'mine, Colin and Meghan, who had already eaten at the fest and were waiting for me at one of the dozen free outdoor stage shows, "Aerial Angels." I remembered that a pair of the trio had just appeared on a cover of the Edmonton Sun, so I knew we were in for a decent show. 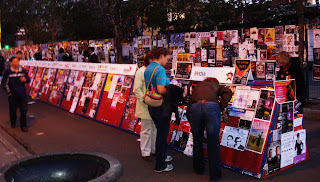 Unfortunately, the show we initially came to the Fringe to see was starting "soon," so we had to leave the angels mid-show. It wasn't until the next morning that I remembered where I'd seen these ladies before. They had appeared on an episode of the CBC's Dragon's Den TV series, asking for a loan to take their show to the next level. They didn't get what they came for, but you can check out their video audition here, courtesy of YouTube.

After Meghan, a.k.a. "RoboCop" (long story), stopped for an "elephant ear" smeared with icing sugar, the three of us walked the one block to the B-Scene Studios (8212-104 St.), which is on the same street as Sports Bras Etc. and the Metterra Hotel. There was already a line-up waiting to purchase tickets ($12) for the 10:30 PM "Scratch" BYOV ("Bring Your Own Venur") show, a four-year-old improv spectacle starring Kevin Gillese and Arlen Konopaki of the Rapid Fire Theatre. We stood on the sidewalk for some 45 minutes before we were finally allowed in, but I didn't hear any complaints other than my own.

We walked down some narrow stairway into the uneventful basement of the 16-year-old studio, past a wall of obscure CDs, and into a dark room no bigger than my tiny apartment. Black walls left much to the imagination, as we made our way to the bench at the very back of the room, next to the sound & lighting chick and the bathrooms. The small area filled up quickly as some minor BO tested my gag reflexes from time to time. Some ticket holders even had to take seats on benches that aligned the stage walls.

"Scratch" started right on time, as a European celloist introduced the comedy duo to the stage before he set the tone of every on-the-spot scene. The foul-mouthed (this is a 14+ show) team briefly gave us a synopsis of their set ("we make shit up") before asking the audience--no more than 40 or 50 folks--for an image ("a snow-covered cabin"), a place able to fit on the stage ("a canoe") and a couple of classic movies ("Saw" and "Braveheart") that would lay the ground work for the next 60 minutes. 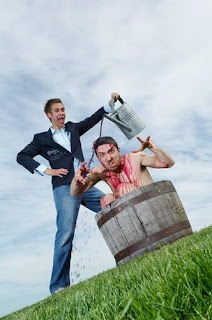 Kevin and Arlen went off of a few audience suggestions and a pair of office chairs, all they needed to bring me to tears. Kevin's dead-on Scottish accent and Arlen's throw-him-a-curveball twists shook up the crowd, sending everyone into fits of laughter at a steady pace. They seemlessly blended the snowy cabin, canoe ride and conflicting movies into an hour I won't soon forget, before braiding the spectator propositions into a final act.

The pair thanked the crowd, provoked applause for their sound chick and accompanying cello player, and then ran off into the back exit. My buddy spent $10 on one of the limited burnt discs featuring the music of the celloist that we had just heard onstage, before we left the "lobby" and walked up the stairs into the streets, which seemed to have gotten busier as the sky darkened. We called it a night, but this was just the beginning of my affair with Edmonton's 11-day Fringe Festival, a world-class venue of top-notch live theatre too bold and daring to set its sights on the stages of mainstream entertainment.

P.S. I recommend purchasing one of the Fringe Fest programs ($6) at any of the local 7-11 convenience stores, or at a Chapter's, a Greenwoods, or Audrey's Books on Jasper Ave.

Below is a video featuring some of the tricks of the "Aerial Angels," courtesy of YouTube