- August 16, 2009
A rundown of our beloved Fringe and its European roots 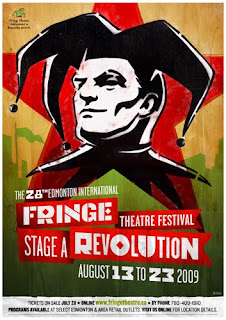 In a city once synonymous with oil, professional hockey and/or that giant mall at any given point in its relatively short history, Edmonton is steadily reinventing itself as a national hub for cultural and entertainment celebration, as it boasts a fury of things to do year-round. Amongst the most recommended and recognizeable ventures would be the world-class Edmonton International Fringe Theatre Festival (August 13-23), now in its 28th year.

Up until last Friday night I was a Fringe virgin, despite residing in Edmonton every single year of the historical live theatre exposè, which is not only the biggest in North America, but was also the first! But I had my cherry popped by a trio of angels ("Aerial Angels") and a pair of improv junkies ("Scratch")...and it felt good! But I assure you, this is just the beginning of our new-found relationship, because I think I'm in love!

Before I go any further, let's step back in time a few decades and take a look into the history of the EIFF, which dates all the way back to 1947...sorta. You see, that was the year that the Edinburgh Festival Fringe kicked off in Scotland as an alternative to the city's International Festival. It was Edinburgh's groundbreaking fringe that inspired Irishman Brian Paisley to establish a similar experience here in Edmonton 35 years later, in the summer of '82.

Rooted in the Old Strathcona region of the city, the Fringe brought an abundance of bold, innovative and experimental theatre shows to audiences in an affordable and accesible fashion. A wide variety of artists performed for cheap ticket prices in local permanent and temporary theatres over what is now an 11-day period, as locals and tourists are able to participate in their choice of plays, improv, magic shows, street performers, dancers, sketch comedies or even stand-up comedy, and then judge for the good, the bad and the ugly.

One of the main reasons why Edmonton's Fringe has blossomed over the years as one of the city's annual highlights is simply because of the artistic freedom granted to the local, national and international artists and patrons. Even as of '09 the various stages--which are no longer concentrated to the Whyte Ave. zone alone--welcome shows that are kid-tolerable, while others require ID. Most lie somewhere in between though. 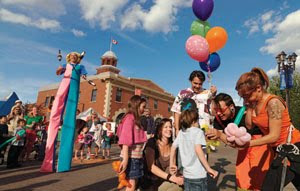 It wasn't long until other cities across Canada and the United States caught wind of the theatre-going, community-enhancing and inexpensive festival, that was continentally exclusive to our humble town. Each city that adopted the ingenious cultural idea brought their own distinct identity to their annual Fringe, including Toronto, New York, Vancouver, San Francisco, Montreal, Calgary, Cincinnati and E-town's biggest rival, Winnipeg.

In order to keep the original principles intact with the term "fringe", various festival producers began meeting with each other from around the country in 1990, forming the Canadian Association of Fringe Festivals (CAFF). The nation-wide non-profit organization was officially registered on September 26, 1994, so as to "recognize that the health of all member Festivals is important to the Circuit and therefore the artists" and "to safeguard the integrity of Fringe Festivals as outlined in four minimum criteria."

Here is that "minimum criteria":
1. Participants will be selected on a non-juried basis, through a first-come, first-served process, a lottery, or other method approved by the Association.
2. In order to ensure Criteria One (above), the audiences must have the option to pay a ticket price, 100% of which goes directly to the artists.
3. Fringe Festival producers have no control over the artistic content of each performance. The artistic freedom of the participants is unrestrained.
4. Festivals must provide an easily accessible opportunity for all audiences and all artists to participate in Fringe Festivals.

By 1998 CAFF had applied, successfully, to have "Fringe" and "Fringe Festival" trademarked in Canada, which would allow the organization to grant other festivals, anywhere in North America, the right to use the term(s) as long as they abided by the aforementioned criteria, born out of Edmonton's 1982 premiere.

"I had my cherry popped by a trio of angels and a pair of improv junkies...and it felt good!"

Since its early days Edmonton's Fringe has taken place in a number of temporary venues, but owes its success to permanent locales such as the TransAlta Arts Barns, Catalyst Theatre and the Walterdale Playhouse. But the big news for this season of the Fringe is the afterthought-turned-reality of the BYOV (Bring Your Own Venue), which allows for more shows, more artists and thus, more choices.

In addition to that, BYOV means that the Fringe can stretch its legs, as it has by adding theatres in the city's north (Avenue Theatre on 118 ave.), east (La Citè Francophone on 86 ave.) and downtown (New City on Jasper ave.). With a total 153 shows--performed over 1,000 times by more than 500 artists--throughout the city, this year's festival has more indie productions than ever before and has the potential of selling about 155,000 tickets, which would nearly double Winnipeg's record of more than 81,000 during their '09 season (though their prices were considerably lower). 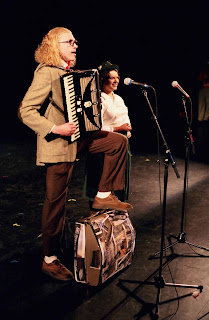 What is BYOV, you ask? It was a term first coined 17 years ago in 1992, by Judy Lawrence, who claimed "it was for site-specific work." She continued, "So if my play was about a serial killer who lives in a train tunnel, I'd say I want to do my play in a train tunnel. It was very artist driven." Of course, the concept has shifted to simply mean a space for artists to perform, such as a bar or church, that they must produce and maintain in conjuction with the owners of the venues themselves.

Some of these temporary stages include Lucky 13 (10551-Whyte Ave.), Ècole J.H. Picard High School (7055-99 St.), Cook County Saloon (8010-Gateway Blvd.), Wunderbar (8120-101 St.) and the Holy Trinity Anglican Church (10032-84 Ave.), which, along with the other 13 BYOVs, hosts 46 different shows. In fact, the first full show I took in at the Fringe was "Scratch," which was held at one of thse BYOVs, the B-Scene Studio, which are equipped for these types of shows, but usually fall short when it comes to convenience and space for theatre-goers.

So now that you know all there is to know about the Edmonton Fringe Festival and how it came to be, there's only so many days and nights for you to call up some friends, head down to Old Strathcona--or any of the city-wide BYOVs--and take in some of the most interesting, provocative, humbling, filthy, bewildering, eccentric, innovative and memorable live theatre shows of the year, from determined and devoted artists from around town to as far away as South Korea, Australia, England, Iceland, South Africa and New Zealand. Happy Fringe'n!

Below is a YouTube video on "choosing your own Fringe adventure."