And the Nominees Are...

MAYOR Stephen Mandel and the Professional Arts Coalition of Edmonton (PACE) are asking Edmontonians to nominate our city's most deserving artists and supporters of the arts for the 23rd annual Mayor's Celebration of the Arts, which will be held at the Winspear Centre on Monday, March 22nd. 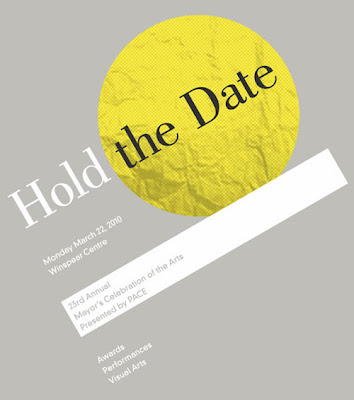 PACE is a not-for-profit arts advocacy organization that has just one part-time employee, in addition to an executive board made up exclusively of volunteers. Since 1986 PACE has been serving Edmonton's arts community, with a membership made up of indie artists and professional arts organizations.

For more than two decades PACE, formerly known as EPAC (Edmonton Professional Arts Council), has strived to "coalesce the professional arts community of Edmonton towards positive lobbying and advocacy iniatives" and "increase the profile of the arts in the city of Edmonton and in the province."

Some of the individuals and organizations that have won these Mayor awards in previous years have included SEE magazine, Audreys Books, Linda Turnball, The Paint Spot, Patrick Lundine, Vue Weekly, Michael Phair, and the late Tim Ryan, who passed away just last year (see video below).

The deadline for nominations is Tuesday, February 2nd at 4:30PM, and all nomination forms are available at PACE's website. For more information on the ceremony and nominations call (780-485-3085) or email (admin@pacedmonton.com).

The video below is a profile of the late Tim Ryan, who won PACE's ATCO Award for Outstanding Lifetime Achievement last year, shortly before his death.