The Revamped Rush Are Ready for 2010!

- January 23, 2010
After a dismal season in '09 Edmonton's lacrosse team is looking to turn things around with new coach & players

LAST March myself and about 20 friends and acquaintances of mine clicked the "Yes" tab when we received our Facebook e-vites to check out the Edmonton Rush vs. the Calgary Roughnecks at Rexall Place (pictured below right). I don't think any of us knew what to expect in what was my first lacrosse game, but $25 to see an NLL battle, sip on some rum 'n' Coke, and hang out with some good friends isn't that hard to say "Yes" to.

That March night, to be frank, the Rush sucked! The Roughnecks earned five goals before our team even got on the scoreboard, and at one point were ahead by 14 points! By the end of the fourth quarter the Rush had lost 22-10 to the Roughnecks, who even managed to tie their franchise record for most points by a player in a single game (11 for Dane Dobbie).

But by that point most of my friends and I had tuned out what was going on down on the green turf and focused our attention on the overpriced beer, random movie chit-chat, and the scantly-clad ladies in the hot tub at the foot of the rink. The 3rd quarter brawl that led to nine fighting majors and nine misconducts also helped take our minds off the Rush's upsetting effort.

Unfortunately, the Rush couldn't even blame that game--one of the worst in their own franchise history--on the fact that it happened to be Friday the 13th, because they ended the season in last place of the National Lacrosse League standings (5 wins, 11 losses) for the second year in a row. The Roughnecks went on to win the Champion's Cup (the NLL's Stanley Cup) for '09.

Rush management realized that some changes needed to made as a response to their embarrassing season, which led to GM Derek Keenan to fire head coach Bob Hamley, and then appoint himself in that role. There was also a roster overhaul for the 5-year-old team, as Keenan scrapped 14 of the 23 players, bringing on a number of rookies and former members of Kennan's previous team, the now-defunct Portland Lumberjax.

"Until we start playing for real we won't know for sure, but on paper and what I have seen at camp and the exhibition game with Calgary I believe we have the ingredients for success," claimed Keenan, who is a former lacrosse player himself and who won the 1992 Rookie of the Year Award as part of the Buffalo Bandits. He's also a second cousin of former Calgary Flames head coach Mike Keenan.

Derek Keenan realizes that his "shrewd" readjustment of the Rush is a "significant turnover and change, but I believe a real postitive change for this team. With Portland folding up and having an opportunity to land some solid players," he continued, "we took advantage of that as well as making some upgrades in our transition game and our athleticism and on offence.

"That's what we focused on in terms of making this a better team and getting us to a level we haven't been yet, which is playoffs and beyond, hopefully." Hopefully!

A couple of players who dodged a trade from last season are captain Chris McElroy and Sherwood Park native & assistant captain Jimmy Quinlan. The latter has been with the team since its conception in 2005, and serves as somewhat of the Rush's community ambassador, spreading his time over charity events and lacrosse workshops.

Among the Rush newcomers is fellow assistant captain Brodie Merrill, 28 (pictured below), who is said to be one of the sport's best players worldwide, and has the credentials to back that up. The 6'4" Ontario native was named Major League Lacrosse Defensive Player of the Year four years running (2006-09), the NLL Rookie of the Year in '06 (& the MLL in '05), and the 2009 NLL Transition Player of the Year. Not bad!

"We have...a lot of warriors, and these guys fit that mold," added Keenan, referring to McElroy, Quinlan and Merrill. "I feel that they're going to bring tremendous leadership along with a lot of other guys." 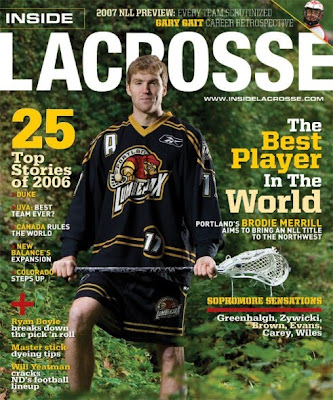 "I also think we have a strong group of leaders," said Keenan. "We have four rookies on the roster and I think all will make an impact, a couple immediate, a couple down the road. I also think we have depth in all areas. It might take a bit of time to mold this team but I think that process will be quick."

So, with a new coach, new players and a new vision for their future in the NLL, the Edmonton Rush are looking forward to proving once again that we are the "City of Champions," a nickname that has seemed undeserving (in terms of sports) as of late.

Unfortunately, the Rush got off to a not-so-good start for the 2010 season, losing 15-7 to the Washington Stealth in Everett in their first game this year (January 15th). But, the very next day, Edmonton were victorious over the Colorado Mammoth at Denver's Pepsi Center, where we left with a 14-13 triumph.

For all of you who are unfamiliar with our nation's national sport--which is most of you, I bet--I'd recommend that you check out at least one Rush game this season (tix start at $17.49), and support our local athletes and their pursuit for the Champion's Cup, a trophy we've yet to capture, though Calgary has somehow managed to collect two!

Below is a video featuring the Rush's highlights of the '09 season: