"I SAT and thought about it for a couple hours, and was like, that's awesome!" That's what local sculptor Jason Carter told Citytv, after he was asked about being chosen as one of only six Aboriginal artists to represent Canada at Vancouver's 2010 Winter Olympics. "Awesome" would be an understatement! 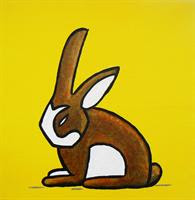 Carter's craft, moulding soapstone and designing paintings of traditional Canadian mammals, is something this Edmonton-bred artist has been doing for about a half-dozen years. "I started carving soapstone in 2003 after I had mentioned offhandedly to my sister that I would love to try sopastone carving, and at Christmas I got a piece of soapstone, which I left in the closet for a while.

"But as I continued looking to connect with my spirituality," he told Vue Weekly, "I was looking for a flat piece of stone to smudge with and carry around with me, I ended up cutting off a piece of this soapstone, which turned into a tiny eagle's wing, and that's when I really started playing with it."

Through these "smudges" of canvas this former graphic design student found a connection with his Aboriginal heritage, a link he had never really been in touch with growing up in the big city. "I started carving soapstone because I was searching for my Aboriginal spirituality," he continued with Vue. "In that, in trying to get height out of the stone, I found Nanabozho, the trickster rabbit."

Nanabozho is a figure of trickery in Anishinaabe mythology, used in Ojibwa, Cree and other Native languages as a tool for teaching children about "morality and their surroundings." The rabbit character is prominent in many traditional Native stories, even in the one telling of the world's creation. "I was inspired by these stories," Carter said.

"I have discovered so much through carving about not just the stone, but myself."

In the early days of his newfound pursuit Carter used unconventional tools like screwdrivers and a wrench to carve out images he'd imagine in his head, images of howling wolves, bowing bison, and...mating rabbits?!

And he paints, too!

Carter's acrylic paintings are all of the same thread, harmonizing with sometimes bright-sometimes bold colours to celebrate wild Canadiana, including the "Grey Coyote," the "Pink Raccoon," the "Red Beaver," and of course, Nanabozho. And more Nanabozho! 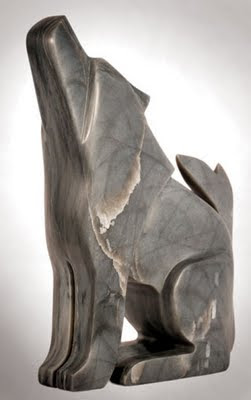 But we're still not through with Carter's resumè just yet. You see, he also moonlights as the camera-cozy cameraman on Citytv's Breakfast Television, where he's been paired on countless occasions with BT co-host Bridget Ryan, who's encouraged his artistic ambitions since the early days. And just last month, Carter & Ryan collaborated on another excursion, putting together a storytelling cabaret & art exhibition at the Catalyst Theatre, where Carter had the chance to showcase his own pieces as Nanabozho: the Tail of Giving.

"I see a streaming narrative throughout the pieces that are interconnected," Carter said. "We were trying to tie the two shows together through storytelling, as both shows are tied to stories." More than two dozen of Carter's sculptures and paintings were on display at the theatre until December 20, 2009.

Carter's art has also been featured at Edmonton's Bearclaw Gallery, which has been exhibiting First Nations artwork for more than 30 years. But now, Carter will be featured on the global stage, as countless of Vancouver visitors from around the world will get to see what he's come up with in his "spare time."

And it's that "spare time" that has lent Carter new insight into who he is, not only as an artist, but as a person, too.

"I have discovered so much through carving about not just the stone, but myself. The stone is often frustrating in that you run into deposits that make it impossible to carve and you have to work your way around the stone, often changing your initial vision for the piece. Or after much fine detail work, the stone will break and so you try again, and again it breaks, and after a few more attempts, you're in this stand off with the stone, thinking 'what is this stone trying to teach me.' Sounds incredulous, I know, but when you spend 10 to 14 hours in the carving studio by yourself, you start talking to the stone."

If those stones could talk back, I'm sure they'd whisper the very Nanabozho tales that inspired their every curve.