Peeking Behind the Curtains of the AGA

- January 26, 2010
Fellow bloggers were invited for a private tour of the Art Gallery of Alberta on the eve of its grand opening 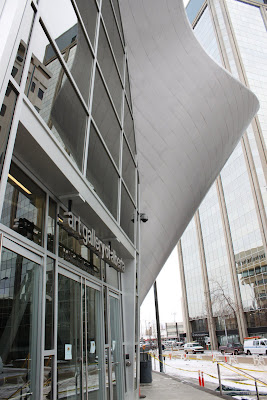 NEW York City has the Empire State Building. Toronto's got the CN Tower. San Francisco boasts the Golden Gate Bridge. And now, Edmonton has her own signature structure that, perhaps with one look, will instinctively correlate it with our prideful city.

Maybe I'm getting ahead of myself, but I think I've got it bad for the AGA, the Art Gallery of Alberta, though it wouldn't be the first time I've fallen for an inanimate object. Let's see, there's my hard cover copy of The Catcher in the Rye, my grey Neon, and of course, my beloved cameras. But, more than ever before, the AGA feels alive!

The city's abuzz with the upcoming grand opening celebrations (January 31-February 1) of the $88 million project, and yesterday (January 25) I Heart Edmonton and some two dozen other members of the "social media community" were graciously invited for a sneak peek at the bewildering interior of the AGA.

Media Relations & Communications Coordinator Sarah Hoyle and Executive Director Gilles Hebert guided the group of local bloggers, podcasters and photogs through three floors of architect Randall Stout's vision for what he thought Edmonton was...is. Through moulded ribbons of steel and zinc, sculpted maple and Douglas-fir, and perfectly shaved sheets of glass, Stout has captured what he saw in our community upon visiting Edmonton in the early stages of the overhaul. And, after years of imagining, I finally got to see the culmination of all those thousands of hours planning, re-planning, designing, building, staging, and now preparing to commence this provincial landmark.

But despite an opening date set for less than a week later there seemed to be a fair share of touch-ups to be made. Scaffolding clogged stairways, tools and equipment borrowed floor space from empty cardboard boxes and buckets of soapy water, and the 76-seat Zinc restaurant was simply too cluttered to observe any further than from a few steps inside. 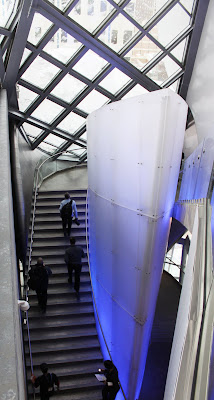 But Hoyle and Hebert assured us that it'd be ready on time for grand opening January 31st. If it weren't for the appreciation of how far organizers have come thus far, I might not have believed them!

Anyways, back to the tour. 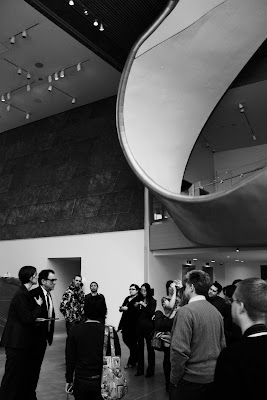 I headed downtown early, and in fact, was the first one to arrive at the 30,000-sq. ft. AGA on Churchill Square for the private tour. By the time 3:00 hit a crowd of Edmonton's "underground" media devotees had assembled in the expansive foyer of the gallery, where one could look out any of its dozens of conjoined windows to the panorama of the Square.

Hoyle and Hebert shared explanations and answers we had of the unsystematic design and construction of the wonderous work of art in itself, but competed for our attention as Lady Gaga (!) tested sound check (sorry Sarah, I had to mention it!). Hoyle told us about exhibits that will be on view for the public (ie. Edgar Degas, Francisco Goya), but were off limits until the official opening. The lot of us came here to examine just one piece in particular anyways...the building itself.

We climbed the incurved stairway--aligned with a blue flare and winding steel walls--to the second floor, where we had a better look at the ceiling that fraternized with a surging landscape of pricisely-squared windows. On the outside of the glass snow had collected, an intentional portrait that, like other aspects of the design, can alter how we see the gallery at various states of the day and of the seasons. 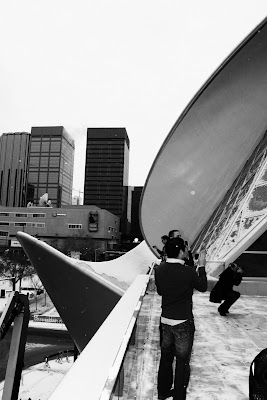 After some quickie outlines of a few of the other exhibitions on display, both permanent and touring, we took the next set of stairs to the third floor, which included the outdoor terrace (pictured left) that put the neighbouring Chancery Hall in a whole new light, as Sarah had suggested. A solitaire sculpture sat at one side of the snow-cloaked terrace, but--according to Hebert--will be replaced most likely by Spring.

From there the group convened at the gallery's basement, though you could never tell by its sleek walls made up of domestic Douglas-fir, floors of maple wood, and sufficient classrooms set up to teach aspiring artists the tricks of the trade. Finally, the ensemble of picture-snappers and note-takers settled down in the bright red seats of the gallery's 150-seat Ledcor Theatre.

For the next 20 minutes or so Hoyle, but mostly Hebert answered whatever questions we had for them, with the exception of upcoming exhibits that were apparently on the DL (down low, for those who don't know).

Slightly past four in the afternoon we excused ourselves from the impressionistic enclosures of this bold beacon that'll serve as a warm jacket for local, national and even global art.

I took to the chilly Square with my Canon and my notebook and immediately began to reminisce about the remnants of the AGA's predecessor (Edmonton Art Gallery), interweaved with the sheer imaginations of Stout and his team, and what this dynamic culmination could mean for Edmonton and it's future in the arts. The new & improved gallery is amongst the most striking in the world, and potentially the most substantial on the continent, but for about an hour that Monday afternoon, it was a prototype for reform in our own backyard.

Below is some footage of the tour (on the second floor of the AGA), courtesy of Mack Male, who runs the popular blog mastermaq.ca.