Elvis Is In the Building!

ONE of the world's most respected and accomplished rock musicians out there is London-born Irishman Elvis Costello, 55, who has been accredited with the ability to "reinvent the past in his own image," and who will return to Edmonton on February 7th.

The Oscar-nominated Rock & Roll Hall of Famer, who also hosts the musical-talk series Spectacle (2008-), will be making his way back to our obliging city for a fundraiser concert at the Winspear Centre, with proceeds going towards future development of Fort Edmonton Park (pictured below). 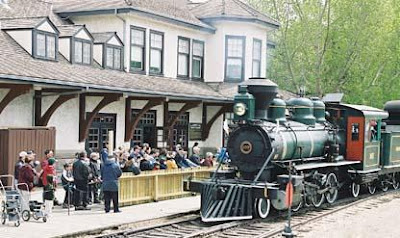 "The objective is to restore a cultural landmark of the city," Costello recently told SEE magazine's Mark Kandborg. "Venues are increasingly uninspiring, the new ones. Quite often they're just concrete raised blocks and all-purpose venues that lack the elegance of older theatres, which have some continuity with other styles of performance. I'm personally very happy to play when I find a great old theatre.

"There are very few modern venues that have that same feeling," Costello continued. "When the lights go down and you forget everything you're probably just concentrating on the music anyway, but you have a head start if you're in a good environment. It's not any great theory apart from that, except that it gives me the opportunity to come back to the city. I haven't been there for awhile."

You can read SEE's entire interview with Costello here.