- January 29, 2010
Have the Crue overstayed their welcome, or is that proposed new arena more essential than originally thought?

THE whole Rexall concert experience is starting to become a bit monotonous. From the obscenely overpriced everything to those tiny plastic seats that dare you to hold off from taking a leak just so you don't have to force everyone else in the aisle to stand up in order to let you by.

I've had it with the oversized line-ups to spend almost seven bucks on cheap rum. I'm tired of getting patted down by some complete stranger for weapons, but even worse, the fact that they even have to. And I'm sick of having to sneak in my beat-up point & shoot camera because ticket holders aren't allowed to capture images of the concert, even though we shell out expensive deniro for access. Man, I complain too much!

I don't know, maybe it's just me? Perhaps I've over saturated myself with these pyro-driven, louder-than-necessary arena blitz's pumped full of obnoxious drunks and those in the process. Or maybe I'm just getting old?!

Whatever the case, that brings us to last Wednesday night (January 27), when Motley Crue hit town...again! Sense the tone? The '80s hard rock legends have played Edmonton many times in recent years, so much in fact that it seems we're Crue'd out! For example, the band had to resort to giving out free tickets (excluding the $9 service charge) before the show--part of their Dead of Winter Tour--in order to fill seats.

But even then there were still empty seats throughout Rexall Place. So, maybe it isn't just me!

Anyways, here's how my night went: 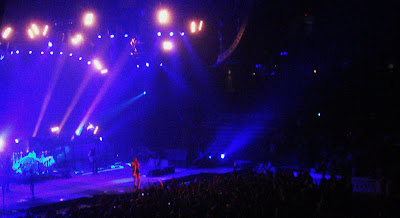 5:00PM: The bell rang at work (yes, we actually have a bell!) and that meant home time, but it also meant just two hours before showtime.

7:00PM: According to the ticket stub the first band hit the stage at Rexall, but I wouldn't know, because I was on the Yellowhead still.

7:20PM: My sis and I arrived inside the Northside arena, after standing in line for about 10 minutes, and of course that intimate pat-down. Good thing I didn't bring my Derringer (that's just a tasteless joke people, so stop dialing 9-1-1). Aussie rockers Airbourne, who I like to refer to as AC/DC II, were already halfway through their 30-minute set by the time we got through security, but we were able to catch a couple songs as we waited to buy booze and a T-shirt ($40).

8:00PM: The Joe Perry Project began their set, defining generic rock to a tee. In other words, they sucked! Perry--who is also Aerosmith's lead guitarist--and lead singer Hagen Grohe must've studied How to Be a Rock Star for Dummies guide (doesn't actually exist, so don't Google it) before the band reformed last year, borrowing rocker clichès like tight leather pants, ridiculous hip gyrations, and screaming truisms into the mic together. 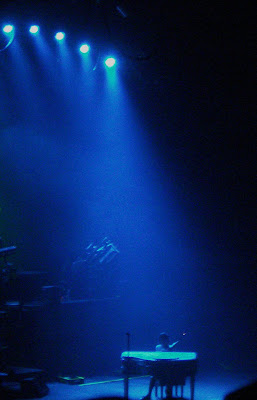 9:25PM: The arena went dark again and 10,000 people, most of whom in various states of intoxication, rose to their feet, as pyrotechnics welcomed Motley Crue to the room. As is routine, the aging rockers erupted into their 1989 hit "Kickstart My Heart." The tipsy gentleman (& I use that term very loosely) in front of me lit up and began screaming along to the lyrics with his buddy, as his lady friend looked unimpressed. Earlier in the evening that same douchebag exchanged a $20 bill for a cup of draft from a passing stranger. Idiots! The place was full of 'em for some reason, but again, maybe it's just me.

9:30-10:35PM: In the span of about an hour the Crue pushed through almost a dozen songs from their nearly 30-year repertoire, including "Shout at the Devil," "Same Ol' Situation" and "Girls, Girls, Girls," as well as some titles I wasn't familiar with ("Motherfucker of the Year," "Louder Than Hell"). Somewhere in between, Tommy Lee greeted the all-ages crowd, which would hoist their beer cups or liters, dependent on the song, into the air for much of the night. At one point during Lee's redundant salutation a young woman exposed herself from atop her boyfriend's shoulders, perhaps in hopes of making it onto Lee's infamous, yet nowhere to be found "Tittie Cam." This, as Lee passed around a communal flask of Jager (I wonder how many of them caught hepatitis!).

10:35PM: After a dozen songs, a tedious guitar solo and some typical "I love Edmonton" chit chat, Vince, 49, Tommy, 47, Nikki, 51, and Mick, 58, faked goodbyes only to return--surprise, an encore!--for a couple more tracks. I think I involuntarily rolled my eyes when the arena lit up with the flames of liters and the glow of cell phones when Tommy Lee sat down to the piano to pour out their ballad "Home Sweet Home," the band's final Top 40 pop hit. The liters were extinguished and replaced by fists in the shape of Devil's horns when Motley Crue ended the night with the biggest hit of their career "Dr. Feelgood" (1989).

10:50PM: My sister, some co-workers, thousand of strangers and myself wandered out into the chilly night and to our frigid vehicles. Unimpressed, I put disc one of Red, White & Crue back into its case and settled for something else instead. Let's hope the Crue take a little break from Edmonton, as to avoid any further strain on our once-promising kinship. But I don't think they're the only ones to blame here. Drunk morons aside (including the ones who brought poutine into the men's bathroom), Rexall must be held partially accountable as host, and this only reassures me that Edmonton could stand a new arena. I say we invite the Crue, refreshed and replenished back to Edmonton when we cut the ribbons for grand opening festivities of said arena! What do you think?

For the complete setlist of the Crue concert click here.

The video below was shot by one of the 10,000 concertgoers (binklesnort) last Wednesday, featuring Tommy Lee at the piano performing "Home Sweet Home" (courtesy of YouTube).