'Local' Game Is Having a Massive Effect

- January 31, 2010
BioWare Edmonton are behind the success of the recently-launched Mass Effect 2 video game 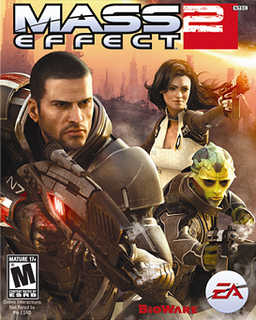 TALK about good timing! Right in the dead of winter the multi-billion-dollar gaming industry has launched yet another reason to stay inside, and it goes by the name of Mass Effect 2. The role-playing action game has become one of the most critically-praised projects in gaming history, and is seeing early numbers that will see it as a commercial triumph as well.

By now you might be wondering why I Heart Edmonton is telling you about the No.1 video game in the world right now. Well, it's because Mass Effect 2 was developed right here in the southside studio of BioWare, which was founded in Edmonton 15 years ago.

BioWare, a subsidiary of video game pioneers Electric Arts, has gained a reputation for developing award-winning PC games like Neverwinter Night and Baldur's Gate, as well as state-of-the-art console ventures such as Star Wars: Knights of the Old Republic, Jade Empire, and of course, the original Mass Effect.

The ME "sequel," which got some production assistance from Montreal's BioWare branch (there's also a third office in Austin), is the corporation's latest offspring, released on PC and Xbox 360 formats last Tuesday (Jan. 26). It was transpired by a group of about 150 people, including numerous graduates of NAIT and the University of Alberta. In its first day there were already some 100,000 gamers playing ME2 online, and about half a million physical copies were purchased that same Tuesday.

But the Jack Wall-produced adventure also earned inspiring reviews from across the board, including perfect scores from Eurogamer, GamesTM, X-Play, Xbox Magazine UK, and other outlets of the medium. It revelled in raving testimonials that painted ME2 as a "gorgeous experience and a staggering achievement" (NowGamer), and other such acclamations. And part III is already underway!

For many of you this is all just noise. You might, like myself, be completely unaware of what this franchise is and what kind of story it tells. So, before I keep patting BioWare developers on the back, let's find out what Mass Effect 2 is all about.

"So far in the Mass Effect universe humans are in deed the galactic's civilization," explained Casey Hudson, ME2 project director, to Electric Playground. "We're kinda seen as the newcomers in terms of advanced people in the universe and yet, as Commander Shepard, you have discovered that there is actually a huge threat to the galaxy, which is that there's a race of machines that come through and they harvest all organic civilization every 50,000 years, and it's gonna happen again.

"In Mass Effect 1 you stopped an invasion of these reapers," continued Hudson, who graduated from the U of A with a mechanical engineering degree. "Now in Mass Effect 2 you realize that humans are being abducted from all over the galaxy, and you think it might have something to do with reapers. You know that there's an alien race that seems to be behind these abductions and maybe they are working with the reapers.

"So you gotta work to figure out what's going on and the only people who have the real information on this is a group called Cerberus, and they're a pro-human group led by a character called the Elusive Man, and they're all very shady...very dark dealings...and they have bad reputations, but they have the intelligence that you need. You have kind of an uneasy alliance with the Elusive Man and Cerberus as you work through this."

The original Mass Effect, launched back in 2007 (but set in 2183), has since sold more than 2 million copies, a mark EA expects to reach with part II within its first week! That's how far this relatively new franchise has come in barely two years, holding its head up high in the company of the industry's most celebrated chains of titles.

These days video games are much more than just that. They've become epics, adventures, mass markets that offer more than simply unfathomable effects. They tell intricate tales, eccentric stories that deal with the deepest human thoughts and emotions. Mass Effect is no exception, according to Hudson.

"Quite often, I think, in life you face a paragon and renegade decision, and should I get straight to the solution and be ultra brutal and start getting rough with people? Or am I gonna calm down, try to find a way that we can all be happy here? That, I think, is the difference between the paragon and renegade approach of Mass Effect versus the good and the evil thing."

The title also deserves some credibility via the list of big-name voice actors that have come forward to lend their vocals to ME2, including Martin Sheen, Seth Green, Carrie-Anne Moss, Keith David, Tricia Helfer, Adam Baldwin, Simon Templeman, and Michael Dorn.

Mass Effect 1 & 2 are available right now, as is the sophomore effort's 2-hour, 2-disc soundtrack. Check out ME2's official trailer below (courtesy of YouTube).