- January 21, 2010
From streetscapes to that proposed arena, a renowned committee will determine our vision for the future of downtown Edmonton

AS much as it pains me to say, Edmonton's downtown could undoubtedly use a jolt back to life. I could sit here and tell all you fine folks that our city's core region is booming with vibrancy and bustling with activity around the clock, but then I'd be lying to you. And that's no way to start a relationship.

The truth of the matter is this...downtown Edmonton has been struggling to maintain a level of buzz and commotion that resembles other Canadian municipalities. In Toronto, Montrèal, Vancouver, and to a lesser extent, Calgary, locals flock to their respective city centres to wine, dine and pass the time, whereas Edmontonians seem to prefer to R&R on Whyte or at West Ed.

And yes, I'm aware that these other Canuck metros also boast their own versions of our beloved strip on 82nd Ave. and our giant mall in the west end, but sparing time for both downtown and these supposed secondary entertainment locales is not something most of us are willing to commit to. But can you blame us?!

With the exception of everything west of 107th Street, downtown nightlife in our city has come to a crawl, barely registering a peep from the swelling population of residents in the area. Why is that, exactly?

Well, one of the reasons surely has to be that late-night establishments are few and far between. From Audreys Books on 107th and all the way east to the Canada Place plot, where the downtown district clips off, there isn't much of anything going on past the dinner hour. 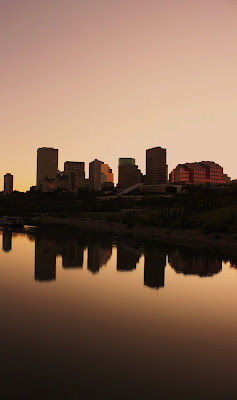 Let's see, there's the Naked on Jasper cyber cafè that promotes 24-hour service, but that's not written in stone. Then there's a couple of gay bars, but that's kind of a niche market, wouldn't you say? And of course, we can't forget about Metro Billiards, Halo, a Boston Pizza and a Wee Book Inn, the Jekyll & Hyde Pub, the Rose & Crown, the Baccarat, and a handful of other neighbouring establishments that are stand-alone campaigners for what could be a pulsating nightlife in downtown Edmonton.

But besides a shortage on alternatives for a night out amongst the skyscrappers and government buildings, there are other reasons why this area is in dire need of a rejuvenation.

Sufficient (cheap) parking can be hard to come by, and even when you find a decent spot for a decent price (free), you're still worried that some dickhead's gonna bust in your window to get to your stereo, CD collection, or that bag of weed that you don't think we know about!

Toss in safety concerns, limited open spaces, constrained late-night transit, scarce nearby residency, and even poor lighting, and downtown Edmonton (east of 107th, that is) has become the place not to be during the evening hours. So that leaves us with one looming question...

How do we alter its current atmosphere and transform the downtown into the central hub of the city? You form a team, that's how!

Earlier this week the city of Edmonton announced that it has put together an impressive squad of nationally-renowned urban designers, city & transportation planners, and landscape architects known collectively as the Livable City Design group. Their mission is to devise the final steps in Edmonton's plan to reboot its downtown. Although they've got quite the challenge ahead of themselves, the LCD team seems more than capable.

"This is a talented team of experts coming together with the City to take the [Capital City Downtown] Plan to a new level," said Peter Ohm, Manager of Edmonton's Planning and Policy Branch. "We want the Plan to renew the vision for downtown through up-to-date and competitive strategies and policies that will guide development for the next 10 or 15 years."

Formed by Edmonton-based multidisciplinary design team Cohos Evamy integratedesign, the LCD group was awarded a contract worth $400,000 to finish what the City had started, after they spent three years of public consultations and completing approximately 80% of the overall proposal. That proposal is designed to convert downtown into "a more vibrant, attractive, high density, mixed use and walkable area," according to the City's official press release.

This alliance of Western Canadian planners & designers will tackle zone regulations and policies that will determine how to implement new housing, parks & other spaces, and additional LRT routes, as well as configuring improved streetscapes and building designs. They also want to incorporate a real recognition of our status as the provincial capital. 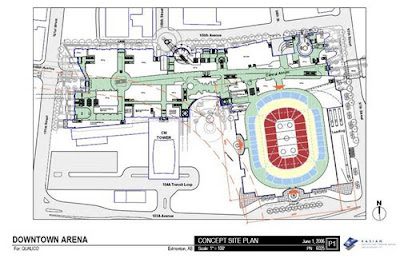 One of the more interesting ventures of the esteemed project is the potential for that new arena complex we've been NOT hearing so much about lately. In fact, the LCD team has even seeked out globally renowned specialists in arena planning (U.S.-based NBBJ), and have suggested a 9-acre chunk of the Station Lands area (near the CN tower/ see map right) as a conceivable site for a proposed sports complex, which would subsequently encourage further development.

But that particular prospect is at somewhat of a standstill, as Oilers owner Daryl Katz has refused thus far to acknowledge these presentations. "There has been no submission, no planning application to the planning and development department yet," said Edmonton's senior planner & project manager Duncan Fraser. "We know it's a private initiative led by the Katz group and we're here to facilitate development and make sure it benefits the city.

Arena or no arena, the Livable City Design team will tread on with their plans to redevelop how we currently live, work and play in downtown Edmonton.

"There is a lot of responsibility that goes with this, because we want to do the right thing and there is a lot riding on it, a lot of civic responsibility," commented Tom Sutherland, managing principal of Cohos Evamy. "We're also very enthusiastic to be able to play a role and help move Edmonton's downtown forward."