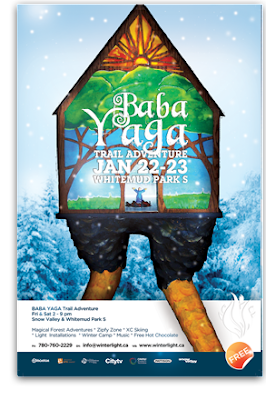 EDMONTON'S season-long Winter Light Festival is weeks in and its latest project, the Baba Yaga Trail Adventure, is just around the corner. The two-day event "integrates art, recreation, theatre and light installations to create an intriguing weekend of original festival programming at Whitemud Park," and it's free!

Based on a rather terrifying Slavic folklore, Edmonton's take will clean it up for the kiddies, telling the story of a young woman named Vasilissa and her journey into the forest to fetch her wicked stepsisters fire from a witch named Baba Yaga, who lives in a hut that stands on chicken legs. You gotta check out the show for yourself to see if Vasilissa gets her fire, and what adventures arise in the process.

Directed by Rebecca Starr, the show is "an animated 1.6K walk through a magically lit forest," transformed by a half-dozen theatre artists and the White Light lantern. The guided night walk-slash-storytelling event will take place along the Whitemud trail, from 2-6PM on Friday and Saturday.

Baba Yaga 2010 will be an expanded affair from '09's presentation, and will also include campfire music, snow shoeing, cross-country skiing, Zipfly sledding, snowboarding, a tug of war, demonstrations from Edmonton Fire Department Technical Rescue, and even a biathlon shooting range. Snacks and hot chocolate will also be provided, as well as a warming tent.