- December 19, 2009
Mexican prison drama is latest in 6-part film series that will spotlight world-class docs over at the Metro

IN conjunction with Edmonton's Global Visions Film Festival and the Toronto-based Hot Docs, Edmonton has welcomed the acclaimed Doc Soup film series. Already a fixture in Toronto, Vancouver and Calgary, Doc Soup is a monthly documentary film series that "exposes audiences to compelling, real-life stories from across Canada and around the world, along with opportunities to engage in discussion with guest directors."

Metro Cinema, in Citadel Theatre's Zeidler Hall (9829-101A Ave.), will host these award-winning features on the first Thursday of every month, up until May 2010. The next screening will be Roberto Hernandez and Georffrey Smith's Presumed Guilty, on Thursday, January 7, 2010 @ 7:00PM. 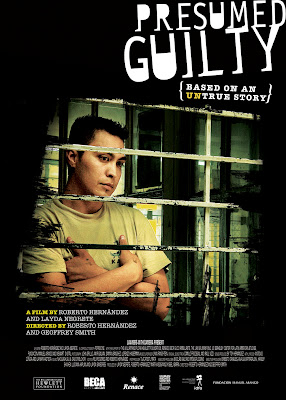 The 1-1/2-hour subtitled docu film follows a pair of attorneys from Mexico who are attempting to exonerate Jose Antonio Zuniga, a young man who was wrongly accused of murder in December 2005. Based on the shaky testimony of a single eyewitness--and not much else--a judge, who hadn't even heard Zuniga speak, sentenced him to twenty years in Distrito Federal Prison in Mexico City.

The Mexican lawyers became unlikely filmmakers, working alongside Zuniga's friends and family to make a movie that told the despairing story of this innocent prisoner and the flawed justice system of a whole nation that presumes guilt rather than innocence.

Individual tickets to see each monthly feature are just $10, and are available at the doors of Metro Cinema. If you've just heard of Edmonton's Doc Soup series you've probably missed the first screening (65_RedRoses on December 3rd), but there's still five films to come in the series, which will be announced in the coming months.

As suggested earlier, director Hernandez will be in attendance at Metro Cinema to answer any questions the audience might have after the film has screened. As for the Global Visions Film Festival, it will make the rounds in our city in November 2010. Check out Presumed Guilty's trailer below, courtesy of YouTube.