- December 17, 2009
Let 'I Heart Edmonton' guide you through the upcoming weekend

WELL Edmonton, it's Thursday, which means that a new weekend is just around the corner! For those of you who work for the weekend you might want to listen up...or read on, in this case. Here's some of the things that are going on this upcoming weekend (December 18th-20th): 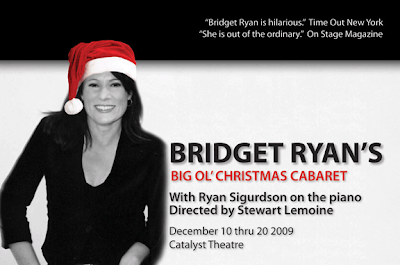 -Not in the Christmas spirit yet? Maybe the Jubilee could help you out with that, as they are welcoming the return of "The Singing Christmas Tree" from December 18th to the 20th (7PM Fri/ 4PM & 7PM Sat/ 4PM Sun). This will be the 40th annual "Singing Tree" concert and the first since 2005. Tickets are at Ticketmaster (780-8000).

-"Bridget Ryan's Big Ol' Christmas Cabaret" comes to an end this weekend (December 10th-20th) at the Catalyst Theatre (8529-Gateway Blvd.). The evening will include show tunes, stories and special guests, in conjunction with local artist Jason Carter's art series "Nanabozho: The Tail of Giving." Call Tix on the Square at 780-420-1757. Tickets are $15-$20.

-Mayor Stephen Mandel will be a guest star at the Roxy Theatre's production of "Mostly Water Theatre Christmas Variety Show," by an Edmonton-based sketch comedy group. The show starts at 8PM on Saturday, December 19th, and runs again in April and May. Tickets are $21 each.

-Designed for children aged 6-12, "Much More Munsch" will be exhibited at the Royal Alberta Museum every day this weekend, and until April 6, 2010. The interactive and bilingual exhibition showcases the work of Canadian children's writer Robert Munsch, and promotes creativity and a love of reading. Call 780-453-9100. 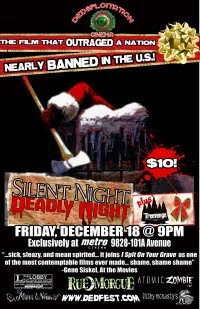 -Alt-rockers AFI and Cage the Elephant will perform as part of "Jingle Bell Rock" at the Shaw Conference Centre (9797-Jasper Ave.) on Friday, December 18th (7PM). AFI will be hosting an autograph session today from 6PM to 9PM at West 49 in West Edmonton Mall.

-The Washington Capitals are in Edmonton this Saturday (December 19th) to play the Oilers over at Rexall Place. The puck drops at 8PM. The game is on CBC, so there's always the option of watching it at a local pub instead.

-Dedfest presents a night at the movies on Friday, December 18th (9PM), with Silent Night, Deadly Night and the short Treevenge! The films will screen at Metro Cinema at the Citadel Theatre (9828-101A Ave.) for just $10 per person. Must be 18 or older.