So much has happened over the last 12 months, and 'I Heart' is here to revisit the best (& worst) moments... 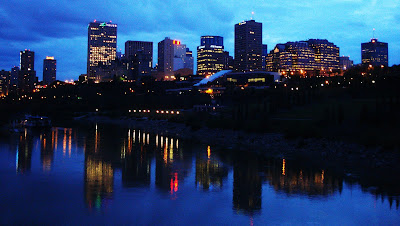 IT'S been another exceptional year for the city of Edmonton, despite some unseasonably cold & record-breaking temperatures, an Oilers losing streak (or two), and that recession that everybody's been talking about.

But, as is our intention, I Heart Edmonton is gonna try and stick to the good that has graced our growing metropolis...more or less.

So, before I ramble on any further, let's recap some of my favourite moments or memorable experiences in my hometown during 2009! (Part 3 of 3):

Edmonton Is North America's #1 Spot...Twice In One Week!
On Sunday, December 13th Edmonton was the coldest place on the continent (-46.1/-58.4 with windchill), and only second to Siberia (-48) worldwide. The low was recorded at the International Airport, but still falls short of the city's all-time record of -48.3/-61 (with windchill), on January 26, 1972. Just three days later, on December 16th, Edmonton was presented with the Sociable City Award for being the "most sociable city in North America"! According to the RHI (Responsible Hospitality Institute), our city raised the bar in '09 when it came to a vibrant & safe nightlife, revitalization, economic development, multi-cultural activities, innovative marketing campaigns, public space entertainment, and more. Not really news to I Heart though!

Reno of the Year
Just in time for the Christmas season, Kingsway Mall (now "Garden"-less) unveiled the sum of a 2-year, $70 million redevelopment on November 13th. The 33-year-old shopping centre, the city's second largest, brightened up its interior, designed a more spacious & welcoming main entrance, and updated bathrooms, lounge areas and its food court, all in an effort to bring more traffic to its more than 200 stores and shops.

Runner-Up: Like Kingsway, Southgate Centre went through a necessary renovation, but unlike Kingsway, it also expanded its square footage before revealing its new look on August 5th. The mall also worked to accomodate a brand new LRT station adjacent from the expansion.

From Pipe Dream to Prospect
When Edmonton-based billionaire Daryl Katz came out of nowhere and offered $200 million to purchase the Edmonton Oilers in January 2008, there were plenty of locals who were weary or concerned, some even downright pissed off! But along with the hefty deal came an intriguing proposal...to build a $450 million arena...scratch that...entertainment complex in Edmonton! Katz even promised to put $100 million of his own cash towards the project, which crept closer to reality during '09. In fact, there was even a proposed location for the esteemed structure, where the Baccarat Casino currently resides (near the downtown Grant MacEwan campus). But the majority of Edmontonians were against spending city tax money on the arena, as much as 76% in August. If the project does eventually get the green light, Edmonton's downtown will see a grand rejuvenation that may par it up with other major Canadian cities.

From Prospect to Reality
In 2005 the Edmonton Art Gallery placed a call for architects from around the world to come up with a brand new look for its dreary downtown building. L.A.-based Randall Stout answered that call and won the contract to give the renamed Art Gallery of Alberta an $88 million overhaul. 2009 saw the 5-year project finally come into its own, setting itself apart from anything this town has ever seen. The venturesome design pulled from local characteristics to inspire its final draft, one that has garnered more than its share of negative feedback. But, despite the naysayers, Edmonton's new AGA will hopefully be a prototype for a revolution in regional architecture when it finally opens its doors on January 31, 2010. See you there?!

Committee of the Year
Homelessness. It's a problem that has increased a whopping 125% since 2000, and which affects an estimated 3,000 Edmontonians. That's why a committed team of locals, including mayor Stephen Mandel, formed the Edmonton Committee to End Homelessness. In January they launched an ambitious strategy called "A Place to Call Home: Edmonton's 10 Year Plan to End Homelessness," which will, in theory, bring that 3,000 number down to zero by 2018!

Strangest Place to Eat a Burger
Hands down, it's gotta be The Motoraunt! Sitting on the corner of 124th Ave. & 66th St. is this cross between a restaurant and a purple double-decker bus that most just call the "bus cafe." The exterior is far from anything you'll see in Edmonton, with an interior to match...oh, and a bathroom about as big as one of my dresser drawers. And then there's those giant burgers! Their 2-1/2-pound Monster Burgers are literally the size of a dinner plate (an 11" circumference)! The Alberta beef patties are served on a freshly-baked French loaf with a side of "motor chips," themselves sprinkled in salt & vinegar, and all for under $20. Finish two Monster Burgers in less than 20 minutes and your third is free (at another sitting, of course). 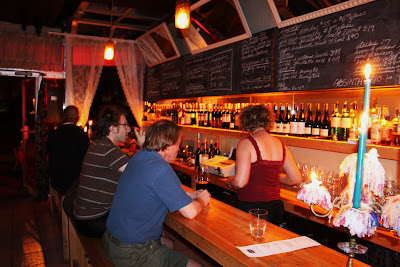 Favourite Wine Spot
I like simplicity when it comes to my alcohol, so Passa Tempo (pictured left) (9914-89th Ave./ 780-437-5588) easily takes the crown here. This intimate watering hole is about the width and length of a city bus and specializes in vino and the foods that compliment it. It's the perfect spot to sip on some reasonably-priced wine & listen to some Mos Def on a crisp summer night.

Local Band Hits Big Time
Well, kinda! Edmonton-based pop band Stereos (formerly known as Stand By Me and then Turn It Up) were discovered after appearing on MuchMusic's 2008 TV show disBAND, which led to two name changes and a record deal with Universal Music Canada. On June 4, 2009 the generic "rockers" premiered their debut video "Summer Girl" (see video below) on the MuchMusic Countdown. The song went all the way to #2 on the Canadian pop charts, followed up with another hit in "Throw Ya Hands Up" (#3), both from their self-titled debut album (#3) that was produced by Juno winner Gavin Brown (Billy Talent, Three Days Grace). On November 7th Steroes, fronted by Pat Kordyback, kicked off their first cross-Canada tour in Windsor, Ontario, making their way to play Edmonton on December 3rd (with The Midway State). They return to Edmonton on March 29th at the Shaw Conference Centre.
Favourite Morning News
With a perky crew that includes Ryan Jespersen, Michele McDougall, Bridget Ryan and Asha Tomlinson, how could you not watch Citytv's Breakfast Television before heading off to hell...I mean work?! For four hours each morning (Monday-Friday) this team shines a light on the people, the places and the events that make our city special.

The 'Lucy the Elephant' Fiasco
Following months of pleading with the city's Valley Zoo to have ailing Asian elephant Lucy placed in a San Andreas, California sanctuary, retired The Price Is Right host Bob Barker visited Edmonton on September 17th. The former game show host is well-known as an animal rights advocate, and first started lobbying for 34-year-old Lucy's move to the 12-hectare enclosure back in the winter of '08, but Valley Zoo staff continued defending their decision to keep Lucy put, and that a transfer may kill her.

"To move her at the [limit] of her respiratory capacity, her ability to breathe...is tantamount to signing a certificate of her death," claimed zoo veterinarian Dr. Milton Ness. Shortly before Barker's visit, TV actor William Shatner (Star Trek) sent a letter to mayor Stephen Mandel, asking to "allow Lucy to retire to better circumstances than at the Edmonton zoo." In the end, Lucy remained in Edmonton, and there are no current plans on moving her to another facility. Lucy has been at the Valley Zoo for 32 years now. 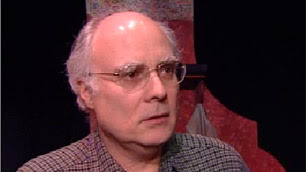 The Goodbyes of '09
At only 62-years-old, influential local arts advocate Tim Ryan died on November 5th, due to congestive heart failure, complicated by the H1N1 virus. Ryan was a vital part of Edmonton's live theatre community, establishing the 30-year-old arts department at Grant MacEwan. He is survived by a wife and daughters Kate & Bridget Ryan.

Although he continues hosting his own show on 630 CHED, 75-year-old Bryan Hall retired from his duties as the official "voice" of the Edmonton Eskimos. "Hallsy," as he is often referred to, had spent some 55 years with the CFL club, calling his last game on November 15th, in which we lost 42-21 to the Stampeders.

Suffering from a heart attack at just 41, Edmonton musician, writer and actor Joe Bird died on April 1st. The free spirit became well-known for his "absurd" style and his open-mike gigs over at O'Byrne's Pub. Bird was also active in live theatre, becoming a regular at the Fringe Festival with his improv partners.

Former Edmonton alderman (1963-68) and mayor (1968-74) Ivor Dent passed away from Alzheimer's disease on March 29th, at the age of 85. Born in Prince Albert, Saskatchewan, Dent also assisted in bringing the 1978 Commonwealth Games to Edmonton. He became a member of the Order of Canada in 1984.

On April 15th Oilers GM Steve Tambellini announced that Craig MacTavish was let go as the team's head coach, after eight seasons together (2000-09). Former Team Canada head coach Pat Quinn took over the reins soon after, as MacTavish went on to work as a hockey commentator for TSN.

Although 35-year-old mother & wife Donna Moore was from Lloydminster, and died in Camrose during a freak storm that ravaged the Big Valley Jamboree on August 1st, Edmonton shared in the mourning. In fact, Edmontonians raised the majority of funds for Moore's family, and hosted the BVJ "makeup concert" on September 17th, for fans who missed out on the remainder of the annual festival. It also served as a tribute to Moore, headlined by Tim McGraw.

Edmonton Jazz Society co-founder and long-time Jazz City Festival Society board member Craig Magill, 69, died on December 31st in New York. Magill was on holidays in New York with wife Wendy when he lost his footing outside a jazz club and suffered a massive brain injury. He is survived by two daughters, one son, and four grandchildren.

One of Edmonton's favourite DJs, Fearless Fred, aired his final show on The Bear 100.3 in August, before packing up and joining the on-air crew over at Toronto's CFNY-FM (102.1 The Edge). Fred's drive-home time slot was given to replacement Scott McCord.

Radio broadcasting pioneer Lewis Roskin died on December 27th, at the age of 89. The Canadian Broadcasting Hall of Famer was involved in establishing Santa's Anonymous, the Brightest Lights campaign, and CHQT radio (now iNews 880). "Uncle Lew," as he was nicknamed, started in Edmonton as CFRN's program director in 1947.

After just three years at Metro Cinema, the Deadmonton Film Festival called it a day, when founder & organizer Matt Acosta announced that he was moving to Vancouver to pursue his film ventures. The horror movie festival was put on "hiatus," but in it's place came Dedfest, which took over the Metro from October 15-18th.