ALTHOUGH indie country phenom Corb Lund grew up in Taber, a small town in southern Alberta best-known for corn, he spent many years as an Edmontonian. 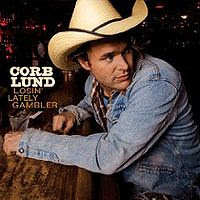 After Lund left Taber and moved to Edmonton he studied jazz guitar and bass at what is now Grant MacEwan University. In 1990 he co-founded The Smalls, a punk-rock band based out of Edmonton that split up in 2001. He later signed to Edmonton-based label Stony Plain Records, but recenty released his sixth album, Losin' Lately Gambler (2009), on U.S. label New West.

Although New West is based in Austin and Los Angeles, Lund's newest album (with his band the Hurtin' Albertans) is rooted in his home province. This is evident in most of the album's dozen tracks, including the video below, "This Is My Prairie."

Lund wrote Track 11 with Harry Stinson, and is the CD's only cut that was not penned by Lund alone. He recently performed an acoustic version over at Vue Weekly Studio, in support of Losin' Lately Gambler, which became Lund's first U.S. release. This clip was taken in late September 2009, posted by Vue, and is courtesy of YouTube.