- December 06, 2009
Updated throwback to the ninja genre is better than you might think...but not that much better!

MY brother always smirks at me, "It's just a movie!," whenever I question the plausibility of some onscreen scenerio that has me quoting the beautiful Alicia Silverstone: "As if!" 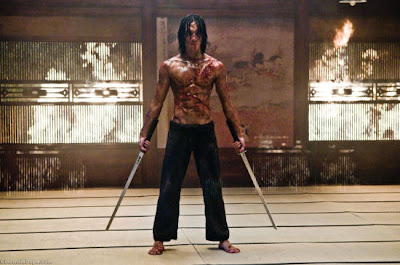 And yes, I know it's just a movie, but that doesn't mean I have to accept sloppy plot holes and lazy explanations for a movie script that was likely hurried to meet some opportune deadline that would optimize ticket sales.

Now I'm not saying that James McTeigue's Ninja Assassin was riddled with these "as if" moments, but that is why I refrained from only giving the action-packed martial arts flick 3 stars out of 5. If all things weren't considered and I had switched off my brain at the Scotiabank Theatre last weekend, then perhaps 4 stars would be more suitable.

But enough of this hypothetical shit, let's talk about some ninjas!

Although the title seems stripped right outta the '80s, Ninja Assassin's production is pure 21st century, and why wouldn't it be? After all, it was produced by Joel Silver and the Wachowski brothers, the same guys who brought us The Matrix trilogy. In fact, I wouldn't expect anything less.

For the most part, they deliver, as South Korean superstar Rain (as Raizo) and his trusty Kyoketsu Shoge (fancy word for blade on a chain) slice through second-rate ninjas with an ease that recognizes him as one of the world's deadliest assassins. But before we go any further, let's talk plot, shall we?!

"It's as though McTeigue had reached his budget and so had to substitute an unfeasible scenerio to wrap things up."

Something I liked right away was where Ninja Assassin was set. It takes place in Berlin, rather than New York or L.A., and it was actually filmed in Berlin, too. I was also relieved to see a cast of relatively unknowns, including heroine Naomie Harris (28 Days Later) as Mika, a Europol agent who has a "special heart."

Mika unknowingly links herself to Raizo when she begins investigating the Ozunu Clan, which most of the world had either never heard of or assumed was a myth. These deadly soldiers have been accepting gold in exchange for swift assassinations for hundreds of years now, and Mika is closing in on finally exposing their shrouded past. 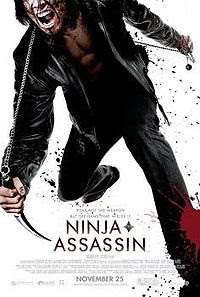 Raizo appoints himself her protector when the clan that he betrayed and abandoned years earlier--following the assassination of his beloved Kiriko (Anna Sawai)--makes it their mission to destroy her, like they have with any and all who've tried to unravel their secrets in the past.

McTeigue uses flashbacks of a younger Raizo (Joon Lee) to pull the blotched story together, but it seems as though he--and screenwriters Matthew Sand and J. Michael Stracynski--started slacking off (or running out of time) near the end of the movie, which is when I began quoting Ms. Silverstone.

In the opening scene of Ninja Assassin these "demon"-like warriors peel apart a mob of Asian gangbangers without ever being seen or heard, but near the end a squadron of law enforcers ambush these special forces ninjas on their home turf, and all of a sudden they ain't so bad-ass anymore!

The final 15 minutes contradict not only the first hour of the 99-minute film, but also the legendary myth behind the folkloric clan. It's as though McTeigue had reached the end of his budget (which was $40 million by the way) and so had to substitute an unfeasible scenerio to wrap things up.

The budget factor also may have affected a few of the combat scenes as well. As slick and savagely enrapturing as these scenes were, some seemed literally darkened and hurried so as to avoid our attention to detail, perhaps to save a buck on elaborate special effects. Dimming the lights is just easier, I guess.

But if these kinds of movies aren't exactly your cup of tea, then you're probably not gonna like it anyways. If you're like me and can find appeal in almost all cinematic formats, then it might be worth your 12 bucks. If you're still not so sure, then switch off that part of your brain that deals with rationality and settle in with your $30 popcorn, and enjoy the ride. After all, it's just a movie, right?!