Tim Hortons Roar of the Rings 2009

- December 05, 2009
The Canadian Curling Trials takes place in Edmonton to determine who will head to the 2010 Olympics

TOMORROW (Sunday, December 6) marks the kickoff of the 2009 Tim Hortons Roar of the Rings (presented by Monsanto), which serves as the Canadian Curling Trials that will determine who will head to Vancouver in February to represent Canada in the 2010 Winter Olympics. Both the men's and women's teams will be crowned during the week-long (Dec. 6-13) tournament at Rexall Place. 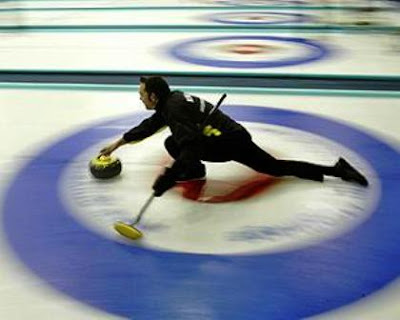 The round robin format has the 1st place teams automatically advancing to their respective finals, where they will be up against the winners of the semi-finals, which is made up of the 2nd and 3rd place teams. Confused yet? Me, too!

The women's finals will take place at 6:00PM on Saturday, December 12th, and will be taped by TSN. That same network will also televise the men's finals the following afternoon (Sunday, December 13th) at 1:00PM. In addition to the TV spots, the event will be available to online subscribers of curlTV.com.

Edmonton's "Team Ferbey" (of the Saville Sports Centre) will be present at the Trials this year, led by 4-time World Champion and Edmonton-born Randy Ferbey (third stones). The rest of the team includes David Nedohin (fourth stones) of Winnipeg, Scott Pfeifer of St. Albert, Marcel Rocque of St. Paul, and Dan Holowaychuk.

None of the women's teams are based out of Edmonton, though three are coming in from Calgary.

There will be 16 teams altogether competing for the coveted positions at the Olympics, and each one of those teams had an hour of practice time today over at Rexall, where icemakers Hans Wutrich and Dave Merklinger have set the stage.