- December 21, 2009
This holiday institution has great intentions, but lacks in what made it special in the first place 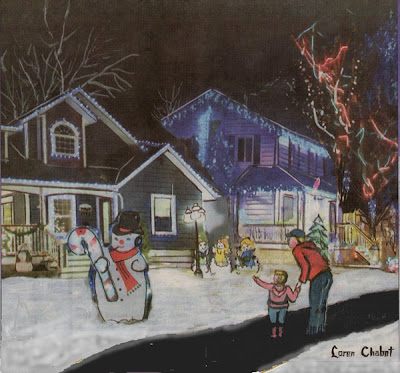 I FEEL bad for saying this, but that snippy title is no spelling mistake! Candy Cane Lane, as it is properly known, kinda sucked, failing to live up to my imaginations of glittering streetways, snowman colonies, and blinking lights you could see for blocks and blocks.

You see, at 30, this was the first time I can remember visiting the famous Edmonton strip (148th St., from 92nd to 100th Ave.), some ten blocks of houses dressed up for the holidays that doubles as a fundraiser for the Edmonton Food Bank, and has been for many years now.

But, as much as I want to, I can't lie. Last night, at about 2 km/hr., I drove past the 200 humble houses that make up Candy Cane Lane (Sunday, December 20th) and kept waiting for something to catch my eye, besides at least a half-dozen horse-drawn MP Stables clicking along the snowy street in bumper-to-bumper traffic.

The sidewalks were busy, but the houses weren't, lacking the charm I had anticipated. Many homes barely tried, others couldn't be bothered at all, but the lane still maintained a pretty steady flow of the Christmas spirit, and that's what this whole collective of homes is all about.

Shortly before culminating at the Saint Andrew's United Church on 99th Avenue, I noticed a group of big blue bins for food donations. Sitting at the foot of the passenger seat was my bag of groceries for the food bank. A jar of peanut butter, a box of pasta, and a couple of cans of peas. But the persistant traffic, messy road conditions and scarce parking never allowed the opportunity to actually drop off the groceries. No worries though, I'll be sure to drop off the donation at a local Safeway instead.

That will then balance out my poor review of the Lane (at least in my own head!), which is meant more as a family outing with the kids anyways. A sidewalk stroll would've been a more enjoyable experience, I'm sure. Maybe next time.

Now that the Scrooge part of me has had its say, let's talk some more about the good that comes out of the Edmonton Christmas staple. 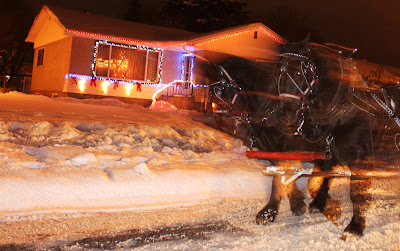 First off, it's pretty damn impressive that about 80-85% of the homes down the 10-block lane are willing to participate in the annual 3-week Christmas tradition. The neighbourhood has, year after year, come together to decorate their houses and front yards--at their own expense--to help create a community of that aforementioned spirit, all in an effort to support one of the city's most important charities.

In recent years the Lane has collected about 30,000 pounds of food for the Edmonton Food Bank annually, donated by thousands of visitors over just a few weeks (December 12-January 2). In fact, it's one of the food bank's largest fundraisers each year.

Candy Cane Lane started more than 35 years ago by a select group of residents in the West End community of Crestwood, and still remains one of the prime examples of the charitable identity of our city. But it just wasn't for me. Fortunately, there are plenty of other opportunities to donate to our food bank all year-round.

For the rest of you, the Lane lights up every day at 5PM until midnight, and will continue up until Saturday, January 2, 2010. You can book a sleigh ride at the Lane's website.