- February 14, 2010
MBF & the Loud Love Choir reminded me of just how much I love music...and they couldn't have come at a better time! 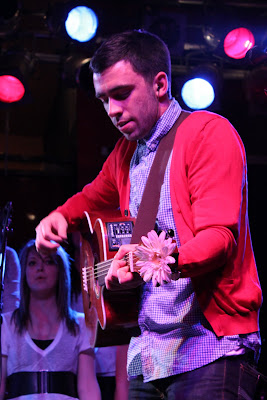 TWO weeks ago I didn't even know who Michael Bernard Fitzgerald was. Fast forward to last Thursday night (Feb. 11) and I can tell you what kind of beer the man drinks (his concert-sponsored Big Rock, for the record), the names of at least three of his former loves (Maxine, Suzie & Caroline), and that he autographs his CDs with an accompanying heart. That's quite the transition!

Now let's just rewind back again to a time when I lived in a world without Fitzgerald, MBF for short.

All the regulars would take turns singing comparable melodies whenever I turned on the radio, so I stopped turning on the radio. And all the CDs in my car had overstayed their welcome. Then, about two weeks ago, I recieved an email about some "folksy" musician named Michael Bernard Fitzgerald, 23, and that the next stop on his 5-city tour of Western Canada was the Starlite Room in downtown Edmonton.

After ignoring the message for a day or two I decided to see who this Fitzgerald guy was, so I Googled him. That's not as perverted as it sounds, it just means that I discovered he's from Calgary (I know, right?!), that the movie Jack makes him cry, and that he's got a MySpace page (actually, he's got two).

As soon as I heard the first song on his MySpace Pop-Out Player, "Reach You," I was done for. Unaccustomed marching drums buried any uncertainty I had, and MBF's on-purpose (?) inability to deliver any of the song's "h" sounds helped to distance his vocal charm from any of those spoiling radio for me.

From there I went to YouTube, where I came across a video clip for a track called "Brand New Spaces." If I wasn't completely convinced of MBF's tonic talent via his MySpace page, then this clip sealed the deal. It was then that I knew I would be at that show at the Starlite Room. 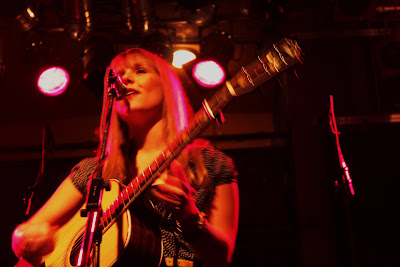 A mutual friend of my sister Carrie's and I had to cancel, so it was just the two of us who headed to Jasper Ave. Thursday evening. I had never been to this music-concentrated venue and private club before (memberships are just $5 per year), or at least not under its current marquee. Back when I was a shifty teen I had danced the night away when the just-off-Jasper joint was a trendy nightclub full of sweaty techno dancers. Now, the general atmosphere had taken a 360.

The vintage brick walls and abraded wooden floors were still intact, but everything else had changed, for the better no doubt. Large black curtains draped sections of those brick'd walls, the benches and figments of tables were already occupied by mostly twenty & thirty-something's, and intimate lighting escorted patrons through the spacious, loft-like room.
My sis and I gradually made our way up towards the stage, which must've been four feet above the slanted hardwood floors. The room filled up quickly, and by 9:30PM an 18-year-old Calgary musician named Melissa Papp made her club show debut--though you couldn't tell--with a single-track set ("That Kind of Girl"), before making room for the next act.

Edmonton's own Kaley Bird (pictured above left) warmed up the already balmy crowd (them spotlights were a tad intense at times) with her self-described "folksy-pop" songs like "Dishes Ain't Done" and "The China Song." Bird's onstage demeanour was composed, allowing a mood that made it feel like she could just as easily be sipping on Kokanee or Big Rock amongst the rest of us in the crowd. 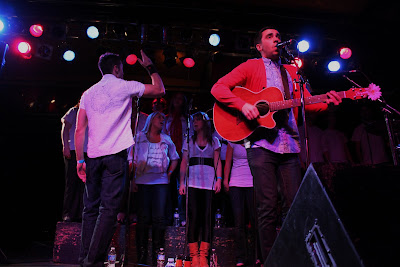 About halfway through her set Bird welcomed Calgary native Sidney York to provide back-up vocals, and then returned the favour when York transitioned into her own set. York's just-as-pleasant disposition seeped into her acoustic playlist, which included "Mortimer" and "Stalker," the latter of which being partially inspired by a Facebook experience. Unfortunately, most of us can relate.

Shortly after 10:30PM, MBF walked up on stage in his blue jeans, checkered shirt, orange cardigan, and red sneakers, and placed two bottles of Big Rock and two bottles of water at his feet. More than a dozen folks--including York--made up his touring choir, but the stage also had to brace for a 3-piece horn section, a pair of percussionists, a keyboardist, and the conductor of the Loud Love Choir. 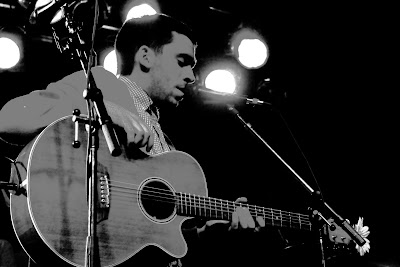 In only about an hour's time MBF and co. made the Starlite Room the place to be that Thursday night, lending the crowd an insight into what happens when you fuse infectious music with imaginative presentation.

Fitzgerald went full force on The MBF Love LP (pictured below left) selections like "Movie Life" and "Amazed," and then pulled back on softer tracks such as "Suzie (I Love You)" and the daunting "Reach You." The choir and band stayed with him through nearly every performance, bowing out when all MBF needed was his guitar.

It was all a joyous spectacle from start to finish, as choir members harmonized and swayed in sync, Fitzgerald humoured us in between serenading us and sipping on his beer, and percussionist Andrew Ball's raphsodic spirit was contagious, to say the least.

Fitzgerald himself sang like he'd been doing this for much longer than he actually has been, though the uneasy-like expressions on his face contradicted this observation. I'm sure part of that is because MBF warned us at the start of his set that he was a lil' under the weather. With that in mind, I couldn't help imagining what his show would've been like at full steam!

His ragged vocals shifted, at times, from his own original lyricism to sampling pop hits ("The Thong Song," "Tik Tok," "Baby Got Back," "My Humps") out of nowhere, testing how such infamous songs could stand up to Fitzgerald's own interjected treatment. 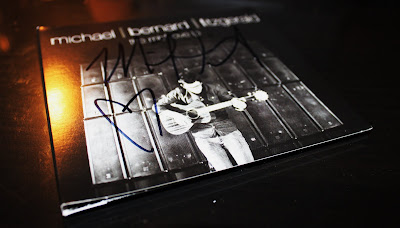 Nearing 11:30PM Fitzgerald told the audience that he was almost done for the night, but not before what may already be his signature song. The choir exited the stage to rub shoulders with the crowd and lead us into the "stomp-stomp-stomp-clap" jig you can see in the video clip for "Brand New Spaces" (see below).

This led into an all-out instrumental blitz, as Fitzgerald slammed his drum stick against anything that would oblige, and the rest of the band followed suit, hammering away at their respective talents. Then the man everyone came to see wished us a good night, and he was gone. Well, for now.

Most of the folks who paid the $15 (+sc) for what turned out to be the final stop on MBF's tour left soon after. My sister and I headed to the back of the Starlite to buy a copy of The MBF Love LP ($15). After my sister accidentally put out the bartender's candle with her tip money (apparently, candle holders resemble tip jars!), we took to the exits.

But before we left I got to shake Fitzgerald's hand, and assure him that he put on a hell of a show, and even got him to sign my CD. If the world has any sense, it'll be worth a lot of moola someday. But whether Fitzgerald ever makes it to the big time or not, the copy is not something I'd be willing to part with anyways.
Andrew Ball concert review EDvent Kaley Bird Loud Love Choir Melissa Papp Michael Bernard Fitzgerald Sidney York Starlite Room