- February 16, 2010
It couldn't have been a more beautiful winter day to celebrate family life, but I took a photogenic detour of local events... 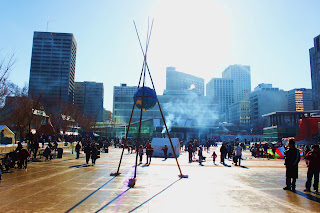 YESTERDAY marked the 20th anniversary of Family Day in Alberta...either a special Monday for family-oriented fun or another day off. Depends on who you ask, I guess.

For me it was a little bit of both, though I spent much of the +4 (temp.) afternoon snapping photos in the vicinity of downtown, where most of the city's Family Day events and activities were held.

Churchill Square was packed with kids and their parents, using the day off to skate at City Hall or have their faces painted nearby, while the new Art Gallery of Alberta offered free admission for the Monday. There were also things to do at the Muttart Conservatory, Winspear Centre, the Stanley A. Milner Library, and other local venues.

But instead of showing you what was going on at these various locations (with the exception of the photo above), I decided to share with you some of the pictures I took during my day off instead.

I would love to see more "graffiti" art like this throughout the city, on mail boxes, lamp posts, bus shelters, garbage bins, and on the sides & backs of buildings, such as this Japanese-inspired mural in downtown Edmonton. 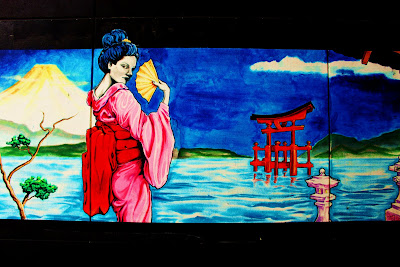 There are hundreds of churchs and cathedrals throughout the city of Edmonton, but one of the most photogenic houses of worship is the Russian Orthodox Cathedral of St. Barbara (10105-96 St.) in the Northwest outskirts of downtown. 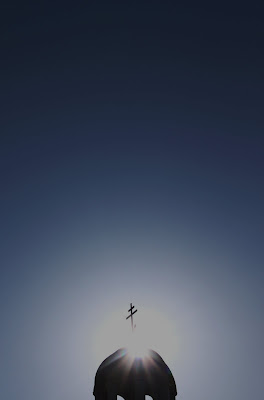 One of the downtown area's most unique structures has to be the flat iron-styled Gibson Block, which currently houses the Women's Emergency Accomodation Centre (WEAC) (9608-Jasper Ave.). Designed by architect A.W. Cowley, the building was completed in 1913 at a cost of only $40,000. 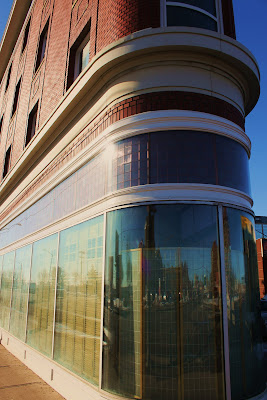 While strolling down the snowy river valley I noticed some guy filmming his buddy borrowing the railing of this wooden staircase as his personal snowboard hill. I asked him if I could take a few shots and... 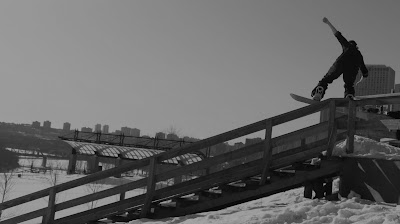 Further down the valley was the Millennium Plaza/Shumka Stage in the area's Louise McKinney Riverfront Park. In the summer season it serves as a meeting place for live music and dance. 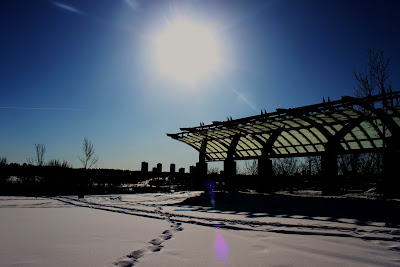