EDMONTON'S own Jessica Gregg--who happens to be my boss' niece!--shared in Team Canada's silver medal victory in women's 3,000-metre short track relay last Wednesday (Feb. 24). At her side during podium ceremonies in Vancouver were Tania Vicent, Kalyna Roberge and Marianne St-Gelais, all of Quebec. 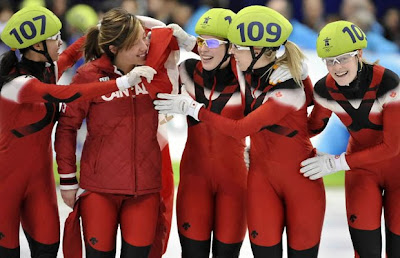 Initially Canada had finished the race in third place, but the 2nd place South Koreans were disqualified after it was discovered that team member Min-Jung Kim bumped rival China's Linlin Sun near the end of the 27-lap run. Thus, Canada took silver, the U.S. snatched bronze, and gold went to the Chinese.

"The spirit was so good, we worked so hard for this," commented Vicent, 34, who became the first woman in Canada to win a medal in four straight Olympic Games.

Gregg, who turns 22 on March 16, comes from a family of Olympians. Her father Dr. Randy Gregg won five Stanley Cups with the Edmonton Oilers, and represented Canada during the 1980 and 1988 Winter Olympics.

Jessica's mother Kathy Vogt-Gregg was a speed skater herself, competing in the 1976 and 1980 Winter Games as part of Team Canada. Her brother, speed skater Jamie Gregg, 24, also competed at Vancouver 2010, and younger sister Sarah, 19, is hoping to make the 2014 Winter Olympics in Russia.

"We weren't pushed into sports," insists Jessica, who also finished fourth during the 500-metre race last week. "We all loved sports of course, and we tended to take up the sports our parents loved as well."

Gregg was only five when she first tried on a pair of her mother's speed skates in their own backyard rink in Edmonton. By the time Gregg was 16 she tried out for the World Junior short track team and made the squad, much to her surprise. "I didn't expect to make the team, but I did, and I did pretty well. I just loved it, and I stuck with it."

The following year Gregg moved to Calgary to study and train, and won a silver medal at the 2008 World Short Track Speed Skating Championships in South Korea. The medal was for women's relay and was shared with both Vicent and Roberge.

This was Jessica Gregg's first trip to the Olympics.

Because CTV (Canada) and NBC (U.S.) own the rights to any and all footage of the 2010 Vancouver Winter Olympics, we've posted a video from YouTube instead, featuring Jessica Gregg participating in a quick 20-part Q&A