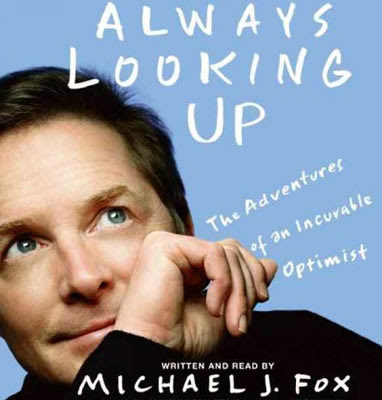 Fox picked up his Grammy yesterday (Jan. 31) at Los Angeles' Staples Centre, for his 2009 audio book Always Looking Up: The Adventures of an Incurable Optimist (Hyperion), which takes a look at how Fox transforms everyday challenges into unforeseen opportunities, despite suffering from the incurable Parkinson's disease.

"The last ten years, which is really the stuff of this book, began with such a loss: my retirement from Spin City," reads Fox in Always Looking Up, which was also an Emmy-nominated primetime TV special last May. "I found myself struggling with a strange new dynamic: the shifting of public and private personas. 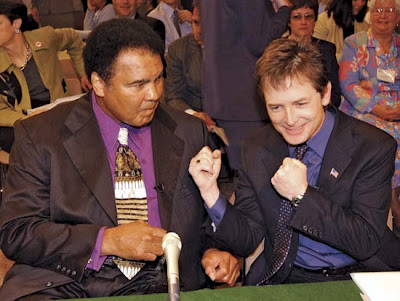 "I had been Mike the actor, then Mike the actor with PD. Now was I just Mike with PD? Parkinson's had consumed my career and, in a sense, had become my career. But where did all this leave Me? I had to build a new life when I was already pretty happy with the old one."

Fox had to retire from acting in 2000, leaving his hit Spin City series in 2000, only to be replaced by Charlie Sheen. That same year he launched the Michael J. Fox Foundation for Parkinson's Research and has since become one of the disease's most recognizable faces, alongside boxing icon Muhammad Ali (pictured with Fox right).

Although Fox is now an American citizen, and has been for many years, his hometown Edmonton is still proud of his Grammy victory, but moreso for his inspiring quest to concur a crippling disorder that effects hundreds of thousands of North Americans. Always Looking Up is his private message to those in suffering to not allow this disease take over what they are, but rather rearrange it to become a part of who they are.