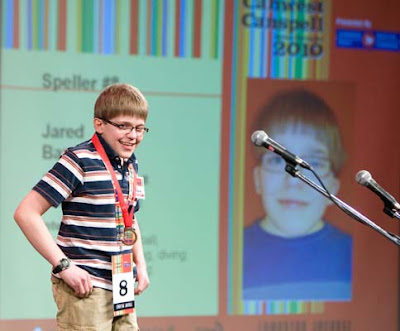 He's only 13-years-old, but Jared Barron of Edmonton's Ottewell Junior High School could easily kick my ass! At spelling, that is. You see, the 8th grader won today's (February 20) 2010 Canwest Canspell Northern Alberta Spelling Bee, presented by the Edmonton Journal.

His winning word was auricular, which--according to Wiktionary--means "of or pertaining to the ear." Don't ask me to use it in a sentence though.

"I was mostly thinking just that I want somebody to get a word right so that we could get on with it," Barron said after he beat out runner-up Allison Probst, an 11-year-old who attends Grade 6 at Calmar Elementary School.

Barron won himself a trophy, $5,000, and a trip to Ottawa to compete in the National Spelling Bee from March 24th to the 29th. And we can't forget about bragging rights!

There was a total of 68 students (Grades 4-8) from across northern Alberta who took part in the spelling bee at the U of A's Myer Horowitz Theatre. It was hosted by Global TV's Mike Sobel.