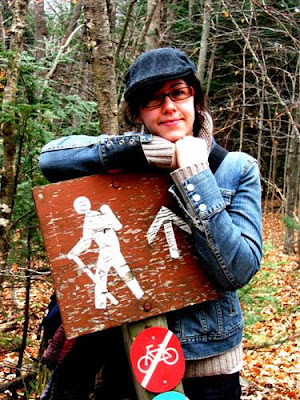 "AS a little kid, I loved to draw and write," said the multifaceted Justina Smith, who has called Edmonton home for about three intermittent years now (I'll explain later!). "As I got older, I began writing poetry, drawing with pastels, ink, ball-point pen...whatever was handy and good for making marks."

Today, the 29-year-old Smith is leaving a mark, transforming canvases, theater sets, and even sheets of scrap paper into works of art.

The proof's in the pudding, or in this case, in the tapestries, murals, portraits, and illustrations Smith has been honing since she was just two-years-old! That also happens to be the age Smith was uprooted from her hometown Edmonton to Red Deer, where she remained up until last spring.

In high school, Smith began to paint using watercolours, and it wasn't long before she sold her first piece, to her grade nine teacher for $40. But by the time she enrolled into Red Deer College (1998-2000), Smith had shifted her pursuit to designing and painting theater sets. But that, too, was a temporary form of expression, as Smith continued to evolve.

"After the program, I thought about trying painting on a smaller scale," Smith remembered. "Canvases measured in inches, as opposed to sets and tapestries measured in feet."

To pay the bills, Smith worked at a coffee shop in downtown Red Deer, but as it turned out, the cafè would moonlight as her own private art gallery. At a co-worker's suggestion, Smith began displaying her acrylic paintings and mixed media pieces at the coffee shop. "The work started selling, so I kept painting." 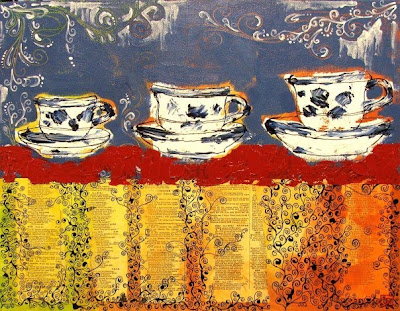 Smith's resumè would soon flourish with highlights that included instructing her own art classes for both children and adults, running her own website, and even having a pair of her murals exhibited in Red Deer's downtown.

After learning this, I had to ask Smith who she credited as influences in the upbringing of her craft, and she began listing off the likes of Emily Carr, Tom Thomson, and early Lawren Harris, as well as others associated with the legendary Group of Seven. But much to my surprise, Smith also acknowledged Red Deer locals like Jeri Lynn Ing, Vivian Bennett, Erin Boake, and Lisa Munroe as artistic guides.

But Smith continues to split her time between painting and other interests, from cooking to learning the guitar, from blogging to taking photos of everything "from old cars...to cutlery," and from running half marathons to participating in an archeological dig this summer in southern Alberta! Somehow she finds the time to maintain a day job, too.

In fact, that's how I first heard about Justina Smith. You see, a mutual friend of ours--artist Darlene Adams--had her work exhibited at the coffee shop-slash-book store known casually as the Mandolin. But by the time I made it out to the popular Northside hybrid, Adams' work had come down, and in it's place was...you guessed it: Justina Smith!

Little did I know that the girl who served me at the Mandolin was Smith herself(!), a fact I hadn't discovered until I got home and emailed the versatile artist, who's stunning paintings were sharing the walls of the Mandolin with shelving units brimming with countless used books.

And now, I Heart Edmonton is proud to display some of Smith's pieces on a more permanent basis. We can't help but recommend that you dig deeper into Smith's repertoire by scrolling through the pages of her personal website or perhaps by heading down to Beck's Design (6510-112 Ave.), where some of her work is currently on display.

Come join I Heart and jump on the Justina Smith bandwagon now, before its inevitable acceleration.

There will be a reprise of Smith's show 'Due South' this March, in the new Prairie Institute space of the University of Alberta's Hub Mall. Check out justlittleart.com for TBA dates, further show updates, Smith's daily blog, and to view or purchase her art. Art shown: (1) 'Untitled' (top center) (2) 'Gastown, Vancouver' (above center), (3) 'According, to' (above left), (4) ' Self Portrait' (below). 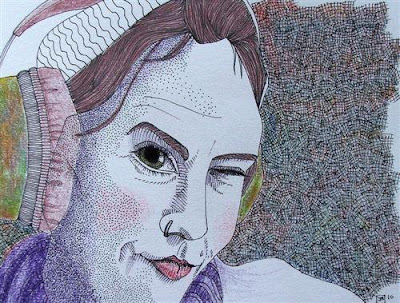