The Citadel Gets a Lil' 'Courageous'

"IF anyone tries to tell you that Canadians can't write plays that are witty and touching as well as thought-provoking, then lead them firmly to the [Citadel]," praised Toronto Star theatre critic Richard Ouzounian. He also declared that the Michael Healey-scripted play Courageous is a "big step forward for one of our most ambitious playwrights." 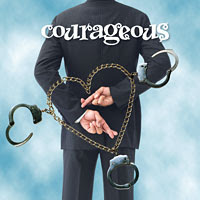 In alliance with Toronto's Tarragon Theatre--where the 2-hour play made its world premiere last month--the Citadel will allow Edmontonians to test drive the production, about "a handful of urbanites living in our rights-driven society.

"What does an openly gay, devoutly Catholic city marriage officer do when he is required to perform a civil marriage for two men--but refuses? What does a deadbeat, two-timing young husband and father do when his friendly, foreign co-worker appropriates his job, his home and his family?"

These ethical questions will be answered for you in the form of, as Ouzounian suggests, "really two one-act plays, tangentially connected, which is both its fascinating strength and its slight weakness."

"It takes a lot of courage to stand up for what you believe in, no matter what your heritage, your religious beliefs or your sexual identity...but especially if you're a hypocrite."

Tickets are going fast for Courageous (Feb 25th's show is already sold out), and go for $47.25+ for individual adults. You can purchase tickets online or by calling the Citadel's box office at 780-425-1820.

Toronto-born playwright Michael Healey describes his play 'Courageous' in more detail in the video below.