- February 28, 2010
Local curling superstar and co. sweep the Norwegians to take the gold at the Vancouver Olympics

PRIOR to the Vancouver 2010 Winter Olympics Canada had never won a gold medal on home turf. Last night (Feb. 27) Edmonton curler Kevin Martin led his team to our nation's 13th gold medal of these Games! This was also Martin's first trip to the top of the podium, previously taking silver in 2002. 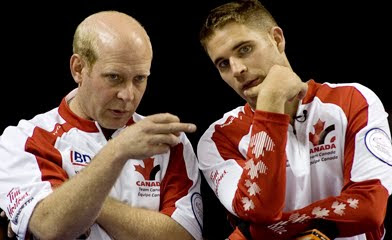 The 43-year-old Martin and his hand-picked team of Canucks' John Morris, Marc Kennedy and Ben Hebert beat Norway's Thomas Ulsrud et al 6-3 on Saturday to give Canada its 25th medal for 2010.

"We put this team together with the idea to get to Vancouver and we did it," Martin said. "It was a lot of hard work to try and get back in the Olympic Games and with all the hard work, we made it to the finish line."

Ironically, it was Team Norway who kept Martin from taking gold at the '02 Games in Salt Lake City, though neither team made it to the podium at the last Winter Olympics, in 2006.

Martin remained humble over his victory, and quickly recognized that the win couldn't have happened without his teammates.

"John was the MVP today," he proclaimed. "If you get bonus points for all the doubles he would have been over 100%. What an amazing game. That's why in the end it wasn't close."

31-year-old Morris (pictured with Martin), who has been nicknamed during these Games as "the Brad Pitt of curling," first started playing alongside Martin four years ago. The Winnipeg-born, Alberta-based gold medalist also happens to be the son of Earle Morris, who invented the "stabilizer" curling broom and authored the Fit to Curl book.

Marc Kennedy, 28, hails from St. Albert, and 26-year-old Ben Hebert was born in Regina. Both are now based out of the Saville Sports Centre right here in Edmonton.

Canada's women's team, led by Calgary's Cheryl Bernard, won silver in their division, and most were present--as was Prime Minister Stephen Harper--during Martin's sweep at the Vancouver Olympic Centre.

"It's an amazing feeling and you just hold the game," said Martin, who also won the Tim Horton's Roar of the Rings in Edmonton last December. "You hold and stop the game and you enjoy it."

Today is the final day of the 2010 Winter Olympics in Vancouver.