- February 22, 2010
City Hall mural display lacks the glitz, but it's the thought that counts! 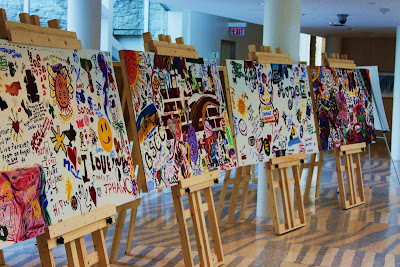 THERE'S no denying that Edmonton is a city that encourages and supports its local artists. We've become well-known nationwide for our warm reception towards prominent and emerging painters, writers, photographers, musicians, dancers, poets, sculptors and sketchers who spend the seasons honing their respective crafts, some through our countless arts programs and at our various venues strewn throughout town.

In fact, every weekend, year-round there's something going on in Edmonton that engages our local artists and their admirers. But that's not to say that on occasion we miss the mark, for lack of a better term.

Case in point...the "Streets Speak" mural series that is currently taking up space at City Hall until the end of the month.

But before I go any further let me assure you that this exhibit, organized by the City of Edmonton Youth Council (CEYC), is a welcoming effort, the art is more than worthy, and it's objective--to raise awareness of poverty and homelessness--is honourable.

With that said though, I was a bit dissatisfied when I drove downtown last Saturday (Feb. 20) afternoon to check out the "Streets Speak" exhibit. I was looking forward to what the iPulse youth group came up with when they asked the impoverished and homeless to contribute images and words that would accentuate their murals.

"Edmonton's young people are so thoughtful and conscientious about the issues in our community," commented Mayor Stephen Mandel, clearly impressed with the ongoing artistic exertions from our city's youth. "I'm so proud of our Youth Council for their commitment to some of our most marginalized citizens through iniatives like 'Streets Speak,' and I know these murals will help shed light on the lives of those affected by poverty and homelessness." 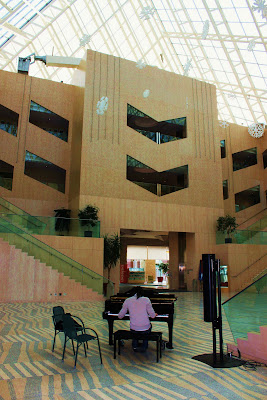 I agree 100%! But when I got to City Hall that afternoon there was no one in sight, with the exception of a roaming security guard and a young gentleman playing a grand piano next to a modest display of about eight or nine canvas'.

The murals were alluring and charming, unique and thought-provoking, but the Hall was deader than a Creed concert, and I was expecting more! More art, more visitors, more available information on what I came down here for in the first place. Maybe I just came on a slow day?

Whatever the case and despite my unmet expectations, I can't help but appreciate what these young Edmontonians (the Council are made up of youths aged 13-23) have accomplished here, and that the group even exists. The Youth Council is "organized in a way that aims to appropriately and effectively represent the youth in Edmonton, and make it easy for members to be involved and pick the area of work in the city that they want to be involved in."

According to the CEYC's official website, they have two main goals, in providing "feedback and input to City Council, municipal government and other various civic committees on issues affecting youth," and to work on its "own projects it thinks deal with issues important to youth around the city."

This latest project is a continuation of the Council's award-winning "Heart 2 Art" awareness campaign of 2008, which raised $110,000 for Boyle Street Community Services. Not bad!

But the "Streets Speak" display is free to anyone and everyone, and is situated on the main floor of City Hall. The art is definitely worth the trip, but don't head downtown expecting anything more than just that. But perhaps that was the point all along, to keep the exhibit as simple as possible, skipping out on the bells & whistles of what these showcases can sometimes offer. Maybe that's a good thing?!

"The murals speak for themselves," said Kirsten Poon, Chair of the Youth Council's homelessness subcommittee. "We're giving voice to stories that need to be told. We are honouring the mural painters who had the courage to let us help raise their voices."

Get to Know Who's Running: Michael Janz (Ward papastew)