- February 17, 2010
Mike Robertson of Canmore became the fourth Canadian to reach the podium in Vancouver 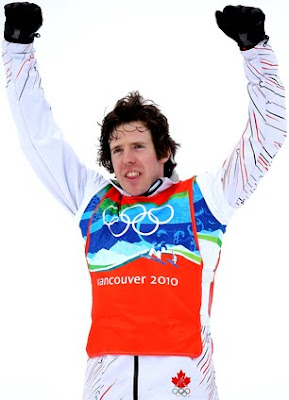 "It was kind of bittersweet," said Mike Robertson of his second place finish in men's snowboard cross on Monday (Feb. 15). "Obviously I wanted to win for sure, but I'm so happy to be second. It's amazing."

"I definitely made a mistake at the bottom, and [Wescott] capitalized and he's the winner now, and I'm second," continued Robertson. "But I can't complain. Second's amazing."

Although Robertson--who happens to be the youngest member on Canada's snowboarding team--was born in Edmonton, he moved to Canmore, Alberta when he was just six.

Although he'd been snowboarding for years, it wasn't until 2006's Winter Olympics in Turin, Italy that Robertson seriously thought about pursuing a professional career in the sport.

"Four years ago--when I was screaming at my television at home, cheering on the Canadian team--was definitely when I realized that I wanted to be here," Robertson said shortly after accepting his silver medal at BC Place yesterday (Feb. 16).