- February 06, 2010
Local and international artists share the spotlight within this subtle gallery that aligns 124th Street 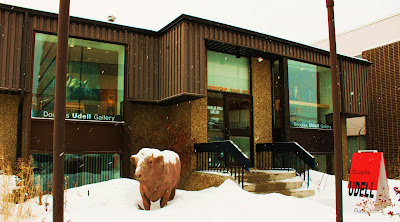 WITH the brand new Art Gallery of Alberta now open to the enthused public, Edmonton's arts community has leaped forward in a big way.

It means that our humble city will be taken seriously when it comes to opportunities to stage global exhibits and that outsider art enthusiasts won't disregard Edmonton as a potential tourist destination.

The AGA has at least raised awareness of the arts community in Edmonton, which explains why I found myself strolling down 124th Street last week with my winter coat and my Canon. The strip is well-known among locals as a hub of galleries that showcase mostly local or provincial artists of various mediums.

Stretching from the tail end of Jasper Avenue and down to about 111th Ave. is the "Gallery Walk," a cluster of modest galleries that share 124th with seasoned eateries, upscale boutiques and the 72-year-old Roxy Theatre. 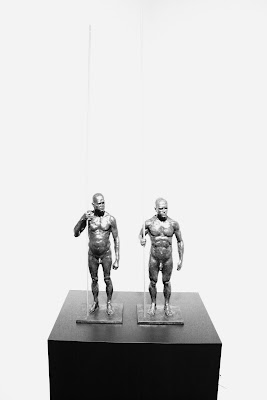 Although not officially a member of the Gallery Walk Association of Edmonton, the Douglas Udell Gallery takes up residence among its art house colleagues. Situated somewhere between the area's beauty salons and coffee shops, I walked past the snow-covered cattle statue just outide the Udell's doors. I headed up the stairway and into the box-like building that almost resembles any of the family dwellings just off the main strip.

I wiped my wet sneakers on the welcome mat as much as I could, before roaming the mostly-carpeted gallery floor. There was a bronze calf that greeted my entrance, a statue similar to the one on the "front lawn." The farm animal seemed far outta place surrounded by elegant paintings and chic photography, but at the same time it appeared right at home.

There was a woman behind a desk who said "hello" and who assured me that I was permitted to snap pictures of the scenery, all price-tagged beyond my means.

The airy gallery was broken up into four or five "rooms" that exposed contemporary visual art from local, national and international artists, including Joe Fafard, Alan Henderson and Tony Scherman. The Udell gallery has been doing such for more than 40 years and has expanded to include affiliate showrooms in Vancouver (est. 1986) and more recently Calgary (est. 2006).

"With a mission to challenge and educate art collectors," Edmonton's branch was born in 1967, when it began exhibiting works from both well-known names and emerging artists, in the form of paintings, photography, ceramics, drawings, sculptures, folk arts & crafts, and mixed media. During the summer season the Udell opens up its garden--on the building's south side--to display even more sculptures. They also offer framing services.

"Travelling to the major art centres in North America with contacts throughout the world, we remain current, enabling us to offer collectors in Edmonton the opportunity to be a part of a much broader focus in contemporary art." 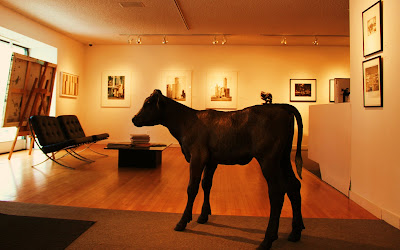 Owner and operator Doug Udell has noticed that there has been an uprising of provincial interest, both young and old, in the arts. "There's probably more galleries showing art...than ever before," he said. "The audience is bigger, the money is more available, so there's just more demand and interest.

"We've seen a big introduction of young people who want to collect, and I think it's because they're a lot more educated visually, the younger people, than they used to be."

Young or old, new or familiar to the gallery scene, the Udell welcomes anyone to come and see what they've got in stock, by walk-in or appointment. For more information on the Udell's current or upcoming exhibitions, or services they offer, visit their official website or check out their Facebook page.

For a complete list of the artists who's work is available through any of the trio of Douglas Udell Galleries click here.