- November 29, 2009
EDMONTON has had its share of nicknames over the decades, from "Oil Capital of Canada" and "Gateway to the North" to "City of Champions" and the erroneous "Deadmonton." But the one I've come to prefer more than any of those is "Festival City," which seems the most fitting of the bunch.

All year long Edmonton is hosting major, minor, or back alley festivals that nobody has even heard of. There always seems to be something going on in our under-appreciated city (see "Edmonton Festivals" in the sidebar)...you just gotta look for it! 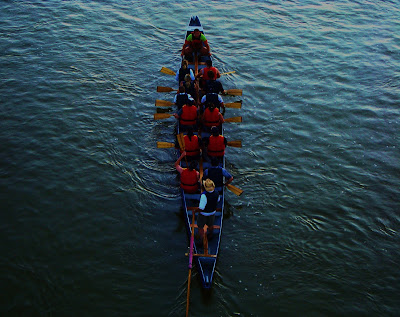 One of those dozens of fests that take over the city every year is the Edmonton Dragon Boat Festival, which was hosted by the Louise McKinney River Front Park in late August.

"The Edmonton Dragon Boat Festival Association (EDBFA) is a non-profit organization which promotes Dragon Boat racing and its multicultural celebration in the city of Edmonton," reads the group's mission statement on their official website. The 3-day event mimics a 2,000-year-old tradition that originated in China, featuring dragon-adorned boats racing to "encourage plentiful rains and a good harvest." Ours is just for fun though!

These photos were taken on one of the foot bridges that connects the two sides of the North Saskatchewan River. I snapped the pictures shortly before the Dragon Boat Festival, so I could only assume the folks in the boat were one of the teams practicing for the big race. 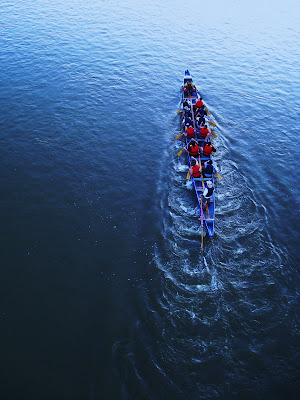 The 14th annual Edmonton Dragon Boat Festival will return to the North Saskatchewan from August 20-22, and will adopt a "Go Green" theme. You can find out more information on this year's race and next year's event by going directly to the official site, or by checking out their Facebook page.