- November 02, 2009
Edmonton begins 28th annual docu-film fest with a film made in its own backyard

THE opening gala ($20) for the 28-year-old Global Visions Film Festival kicks off at 8:00PM this Thursday, November 5th with the screening of the locally-based documentary feature Broke (2009). 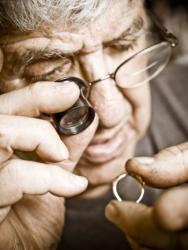 Helmed by first-time director Rosie Dransfeld, Broke follows the story of "grouchy old guy" David Woolfson, who runs an inner-city pawn shop in Edmonton, and has been for the last 16 years. The award-winning film has recieved applause throughout the national film community and has already been screened at film festivals in Toronto, Vancouver and Calgary.

The GVFF "celebrates the work of passionate, accomplished documentaries from Canada and around the world." It started back in 1981 as the Edmonton Learners Center's Third World Film Festival, and is now recognized as Canada's oldest documentary film fest. By 1998 it had become a non-profit soceity (The Global Visions Festival Society) and changed its name.

The 2009 edition takes over Edmonton's Downtown Arts District for four days, starting later this week. There will be some 50 other feature and short docs from over two dozen countries showing this year, at the Paramount Theatre, Metro Cinema, and the Stanley A. Milner Library Theatre. Click here for a full film listing and schedule.