EDMONTON has a new mascot, sorta. Earl Grey, as he will be known, was unveiled earlier today (Nov. 20) to a group made up mostly of the media, and will make his official debut at the 2010 Grey Cup in Edmonton. 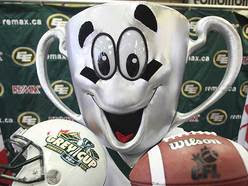 The $10,000 mascot made quite an impact on those on hand, as well as subsequent readers and bloggers, who had lots to say about the cartoonish character.

The Edmonton Sun conducted an online poll to clarify whether locals were content with Earl, or flat-out hated him. The results were about 50/50.

Modelled after the 100-year-old Grey Cup championship trophy, the green & gold-coloured Earl was made possible after the federal government handed over $150,000 to the Edmonton 2010 Grey Cup Committee.

Earl was designed and created right here in town by the International Mascot Corporation, which has production & marketing facilities in New York, Madrid, Atlanta and E-town. It was named in honour of Lord Earl Grey (1851-1917), the former Governor General of Canada who first donated the Grey Cup to amateur Canadian rugby in 1909.

But Earl will become property of the Canadian Football League once the Grey Cup game ends on November 28, 2010, and may then become the official mascot of the Grey Cup for future championship games.