- November 11, 2009
e
It is November 11th today, which means Canadians are celebrating the 90th annual Remembrance Day, commemorating the sacrifices made by the armed forces and civilians in times of war, dating all the way back to the First World War (1914-1918).

The special day of remembrance (known as Veterans Day in the U.S.) was first dedicated to November 7th by King George V in 1919, stemming from a pair of ceremonial periods of remembrance that were established by Edward George Honey in 1917.

Although the official national ceremonies are held each November at the National War Museum in Ottawa, Edmonton hosts various ceremonies throughout the city. The largest of which is held annually at the Universiade Pavilion, better known as the "Butterdome" (pictured below). 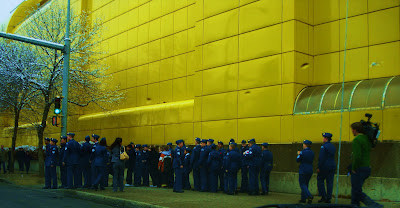