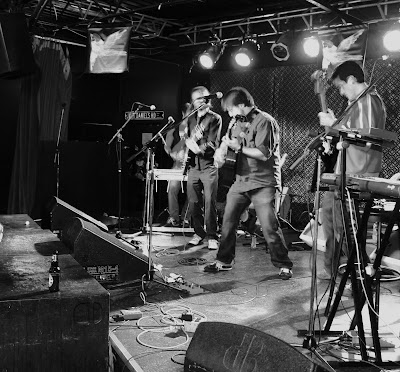 FOR someone who has seen icons Bob Dylan and Neil Young in concert in the last year or so, I can honestly say that I had a better time listening to the alt-country rock sounds of local band Jeff Stuart & the Hearts, who hit up the Pawn Shop Tuesday night (Nov. 10) for their anticipated CD release party.

Dylan & Young went through the motions of another arena concert, pushing through their catalogue of classics like they had better things to do. I guess I can't blame them for showing a lack of enthusiasm for what must've been their gazillionth show, but what the hell?! I expected more outta these legends of rock, and yet got more than expected from Stuart and his squadron of multi-instrumentalists.

Almost makes me hope Stuart & the Hearts fail to hit it big! But not really.

My sister Carrie and I arrived fashionably early to locked doors at the Pawn Shop on Whyte Ave., but right on time for a chance backdoor meeting with Jeff Stuart himself.

Clad in black from head to toe, Stuart shook our hands and told us he appreciated our support. He seemed like a genuinely nice guy, which had me even more excited to check out the live show, all in support of the band's premiere full-length album Black Dogs Blue Giants, available to the public for the first time tonight.

After a quick drink at the nearby Devlin's Cocktail Lounge--where an acquaintance of my sister's and I happens to be head chef--the two of us were amongst the first patrons when the Pawn Shop opened its doors at 8PM.

When we got to the top of the stairs, and past the plethora of mirrors that align the introductory walls, I realized that I had been here before. It was many years earlier, and the place was called the Rebar, serving as the strip's foremost techno club when I was a young(er) lad. Since then it's changed hands--and names--more than I could keep track of, but now it's the Pawn Shop, one of the best music venues on Whyte.

We found seats in front of the stage, as classics from CCR, The Cult and The Stones buried the background noise. I sipped on my rum 'n' Coke, Carrie on her Bud Light, conversing to pass the time before the first band, Pale Moon Lights, took to the stage. 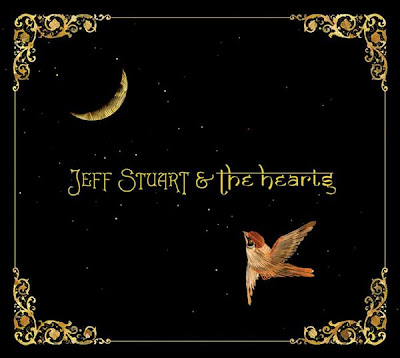 In typical "rock star" style, Alberta boys Pale Moon Lights arrived some 20 minutes past showtime, but they were easy to forgive after their 30-minute set, which included unpolished performances of originals like "Back to the Fold" and "Announcement." They also tried on what I think was a Feist cover, but I might be way off on that one! "I wrote that," lead singer and guitarist K.K. Glabush joked to the swelling crowd.

There was about 15 minutes in between the Pale Moon Lights dismantling their equipment and the Hearts setting up theirs, enough for a bathroom break and for the whole floor to fill up with out-of-nowhere clubbers. In fact, my sis and I had to abandon our seats in order to even see the band.

It was about 10:30 by the time Stuart & the Hearts met the stage, filling it up with all six members and their communal instruments.

I'm new to the Hearts, and their music is new to us, so I couldn't tell you the setlist, or even what song they kicked off with, but I could, in all honesty, tell you that they all kicked ass, plus...

I think I fell in love!

With whom, you ask? Well, let me tell you.

Her name is Sara Hart (pictured below right), and she's the Heart who plays the fiddle-slash-keyboards-slash-guitar, and supplies vocals, too. And she certainly wasn't lost amongst the parade of musicians onstage, bouncing around like a seasoned entertainer with a genuine look on her face that said she loves what she does.

Don't get me wrong, though, Stuart and the rest of the Hearts were just as flattering, but the only Heart in a skirt (at least I hope so...couldn't really see what the drummer had on!) was the nicest to look at.

Anyways, back to the music.

Stuart seemed right at home behind the mic and his guitar, shifting from song to song with his brigade of unrestricted music makers, branding their own style of country-dipped indie rock.

Gavin Dunn, Dwayne Martineau, Tim Resaul, Christopher Quesnel and Hart backed Stuart on bass, keyboards, fiddle, drums, and what I can only assume was the steel guitar. Not in that order though...in fact, several members rotated shifts on various instruments, harmonizing on songs most folks in the audience had never heard before...

...Songs like "The Boss," "Hold Out," "With a Word," and my personal favourite "The Wire," which sealed the hour-long (give or take) party. Every haunting note of the latter reminded me most of why I love discovering new music, and it's icing on the cake that Stuart & the Hearts call Edmonton home.

No longer in my twenties [moan], and this no longer being that vibrating techno club, I had to call it a night after Stuart's set, opting to pass on closing band Ayla Brook for the comfort of my awaiting bed. But not before I hit the floor-side fold-away table to pick up what we all came here to hear, Black Dogs Blue Giants ($15), an 8-piece collection that's already warmed up to the CD player in my Neon [moan].

Do yourself a favour and pick up your own copy here.

But the night wasn't even all about the songs themselves, the charming lyrics and eloquent musicianship. It was, in part, the heart of the band (pun fully intended), a community of skilled instrumentalists and simple vocalists who came together--and not just for the Pawn Shop crowd--to pursue a formula of spirited melodies for a satisfied audience of Edmontonians.

And therein lies the difference between those Dylan & Young "engagements" and Stuart & his band's intimate presentation...the heart!

For a sneak preview of the album you can listen to a couple of the tracks at the band's MySpace page.
e
Black Dogs Blue Giants concert review EDvent Jeff Stuart and the Hearts Sara Hart The Pawn Shop Whyte Ave.